The first days of private garbage collection were off to a rough start in North York and other neighbourhoods west of Yonge Street as new provider Green For Life struggled with delays and uncompleted routes.

Green For Life increased trucks from 80 to 95 after crews missed the 6 p.m. deadline on their second day of pick-up.

Persistent problems that first week also prompted Jim Harnum, general manager of solid waste management to issue a statement apologizing to residents for the inconvenience during a transition period.

In an interview eight days after the launch, Green For Life CEO Patrick Dovigi downplayed the delays, chalking them up to growing pains.

“The first week went as we expected with any normal start-up,” he said, adding crews were adjusting to new routes and situations.

The following Tuesday after the launch “we got them considerably earlier than the week prior,” Dovigi said, adding everything was off the street by 7:30 p.m. with the exception of a bit of yard waste.

Public works chair Denzil Minnan-Wong said things were running better in Week 2 of collection. Still, he wasn’t expecting the widespread reports of pickups late into the night or spilling over into another day.

“We thought there would be some growing pains,” he said. “In terms of the magnitude, I was a little surprised.”

He didn’t rule out taking action by imposing fines on Green For Life for late pickup, as stipulated in their contract.

Ultimately, Minnan-Wong said the city’s obligation is to ratepayers.

“The patience of residents of District 2 is not infinite and in some point in time, excuses don’t milk the cows,” he said. 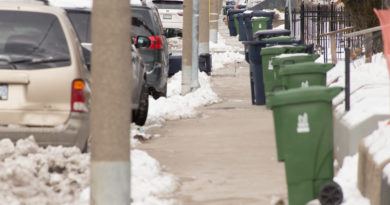 Tentative deal, garbage pickup to continue in eastern half of Toronto — for now