When shovels went into the ground on June 16 for the groundbreaking of the new Leaside arena, history was repeating itself.

“It’s basically a carbon copy of what people have done in this community all along,” said Paul Mercer, chair of Leaside arena expansion committee. “The original arena was built as a result of the efforts of the Lions Club and the Rotary Club … and they basically got the balance of the community and their workers involved.

“And both those groups are still involved in our project and our fundraising initiatives too.”

At the groundbreaking ceremony, Mercer said there was a genuine feeling of accomplishment coupled with disbelief.

“A lot of people leading up to that actual groundbreaking said, ‘Can you believe that today’s happening and that we raised the money and this is taking place?’” he said. “And the answer is, ‘Yeah, I can.’”

Tasked with raising $2.5 million for the construction project, the Leaside community managed to reach that goal in January. Now, Mercer says the total is up around $2.9 million and growing.

“The original arena, which is 60 years old, has never been named, and (a local) family availed themselves of that opportunity and brought along a cheque for $250,000,” he said. “So the [existing] arena will always be in their father’s name.”

Just because that $2.5 million goal was reached, it doesn’t mean the fundraising effort is over, Mercer said. There are still a few naming rights available — including for the new arena, the Zamboni and some smaller options.

All money raised will go toward paying down the debt owed to the city.

“Everything we raise above $2.5 million means that we will have less debt to go ahead and pay back and it will help keeping the ice rates down for all the user groups,” he said. “That’s why it’s so important to carry on with the fundraising.”

The construction is expected to take 12 or 13 months according to Mercer, who said it would mean the arena will be built in time for September 2013 — that year’s start to the hockey season.

While that’s still a year away, Mercer said for now just getting to this point is gratifying.

“It marks the end of the first journey basically getting us to this stage,” he said, adding the process was started 12 years ago by Leaside residents. “So to get to this point where we can actually have a contractor there and a city representative … is really rewarding for an awful lot of people.”

May 29, 2012 Town Crier staff Comments Off on Western Tech Walks for Water 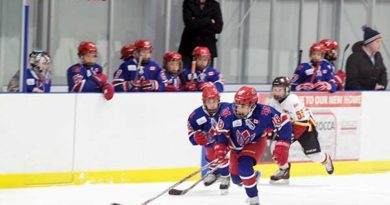 Community pulled together to survive blackout