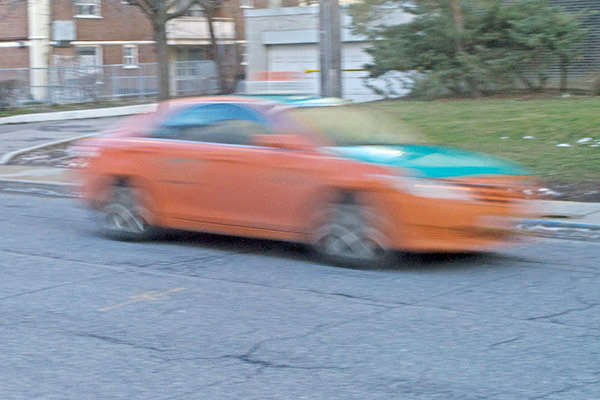 JASON SUTCLIFFE/TOWN CRIER HOW FAST? Cars like this one are zipping along Roehampton Avenue 10 km/h over the speed limit, according to the Town Crier’s test. Roehampton was one of many streets that had its speed limit lowered from 40 to 30km/h last fall. Another test done on Roselawn Avenue found different results, with most drivers travelling about 10 km/h below the speed limit, possibly due to speed bumps on the road.
Edition: North Toronto
NEWS
February 19, 2016March 28, 2017 Jason Sutcliffe speed limit, traffic safety

Speed limit changes may have been implemented just over four months ago, but drivers on Roehampton Avenue don’t seem to be any lighter on the gas pedal.

Roehampton, an arterial road running east-west between Yonge Street and Bayview Avenue is just one of many streets that had its speed limit lowered from 40 to 30km/h following community concerns over road safety made their way to council last year.

The Town Crier recently tested how drivers are behaving with the new speed limits on two North Toronto streets.

First we marked off a short distance on Roehampton and timed cars as they covered it. A quick math equation determined how fast cars are travelling.

While not enough to be a scientific study, the 20 cars on Roehampton averaged 40 km/h, with just one car going the 30 km/h speed limit.

Harold Lass, a resident of the area, suspects people are still speeding, but also says overall the speed limit change is for the better.

Another area resident, Ryan Cooker, says he didn’t even know about the speed change and has seen no change in the way people are driving.

“I didn’t hear about it, nor have I seen anybody doing it,” he said. “I don’t think it has really clicked with many people yet.

“(The Yonge and Roehampton) intersection is the worst one because they gun it to get through the intersection.”

With the same test on Roselawn Avenue, a street with numerous speed bumps, the results were much different.

The average speed, again based on 20 vehicles, was 20 km/h without a single car reaching 30.

While speed bumps appear to have had a drastic effect on the speed of traffic on Roselawn, from a policing standpoint, Constable Clint Stibbe says it is too early and there are too many variables to know how effective the change is.

“The question is it working or not can’t accurately be answered,” he says. “The time frame [from Sept. 15 to Dec. 31] is fairly short. If we try and quantify that versus the rest of the year, there would be too many variables that would affect the outcome or assessment.”