David Crombie is a son of Swansea.

The former Toronto mayor grew up here and so did his parents.

“I was born and raised there until age 13,” says the 73-year-old. “My mother and father were raised there. There have been Crombies in Swansea since 1904.”

Crombie and his parents are also Swansea Public School alumni.

“To me, it’s a wonderful village bounded on three sides by water with the Grenadier Pond, the Humber River and Lake Ontario, ” he said.

By 1936 when Crombie was born, Swansea had grown to the second largest village in Ontario, according to the Swansea Area Ratepayers Association’s website.

Swansea amalgamated with the City of Toronto in stages from 1967 to 1969, but there are still traces of the old village, said Crombie.
This past May, he led a two-hour tour of his old stomping grounds, pointing out many of the old buildings like the old Runnymede Theatre, the Swansea Fire Hall and the old Town Hall. The tour was part of the annual Jane’s Walk, in honour of the late urban activist Jane Jacobs.

Swansea Town Hall opened 50 years ago and is still standing today but now operates as a community centre at 95 Lavinia Ave.

The way Crombie sees it, “We were Torontonians, but Swansea people first.”

The feeling of being close to nature in an urban setting is what still draws him back to Swansea.

“If I want a sense of peace, I get on the subway to High Park and walk down to Grenadier Pond to Ellis Ave., down to Windemere, along the lake to Sunnyside Beach back up to Roncesvalles and take the Queen Street streetcar back to the subway.” 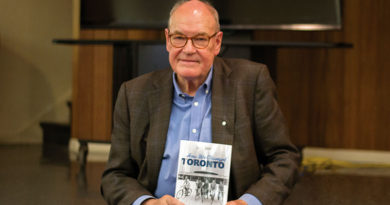 Is Hillcrest going under?