The remaining members of Toronto Community Housing’s embattled board are staying put despite Mayor Rob Ford’s calls for their resignations.

The issue was expected to be the heated topic today at city hall, but while politicians voted unanimously to move the issue to the top of the agenda, the mayor failed to get the votes needed to debate it without having the issue sent to Executive Committee first.

The controversy stems from scathing reports from the city’s auditor general which said the housing corp. could have saved between $4-10 million if there was increased competition for contracts and shone the spotlight on inappropriate staff expenses ranging from planning meetings at spas to lavish Christmas parties. Meanwhile the city-owned housing corp. has a state of good repair backlog of over $300 million.

While the auditor didn’t call for a clean house of the current board the mayor has. The board chair David Mitchell plus eight other members resigned at the mayor’s request but councillors Maria Augimeri and Raymond Cho and tenant reps Catherine Wilkinson and Dan King remain.

“Has (council) malfeasance on our part?” King asked. “Has the auditor general mentioned cause for our removal? If not, then we have a legitimate right to be here. Calling for our removal because they don’t like certain people is not what I call democratic.”

But the heat isn’t off the Toronto Community Housing’s board yet as an emergency Executive Committee meeting will be called for tomorrow, said the mayor’s press secretary Adrienne Batra.

Councillor Doug Ford said the auditor’s reports showed a “blatant abuse of taxpayers money,” and called out the councillors who voted against debating the issue today.

“The people of Toronto have voiced their opinion. They are extremely upset over this matter and they want action. And we are trying to give them action,” Ford told the media.

Councillor Adam Vaughan said he voted against debating the issue today to allow for greater transparency and accountability.

“Until we are prepared to replace (the tenant board members), I am not prepared to take people off the board especially when the auditor’s report finds no fault and makes no accusations and finds no wrong doing on behalf of tenants (representatives),” Vaughan told the media. “If they did nothing wrong, why are we taking them off the board?”

According to Toronto Community Housing spokesperson Kyle Rooks the board is still functional even though its membership has dropped down to four.

“Until instructed by council, we continue to function as a board and organization, including moving forward with full implementation of the Auditor General report, which is our current focus,” he wrote in an e-mail to the Town Crier.

The issue will come to a special council meeting at 5:30 p.m. on March 9 called only 24 hours before. Initially the mayor had called a special executive meeting to deal with the issue so it could be referred back to council as soon as possible.

However, a move is afoot, led by Councillor Pam McConnell, to shut the meeting down before it is even called to order. To read more about this latest development click here.

Whatever happened to civility at city hall?

April 12, 2012 Town Crier staff Comments Off on Whatever happened to civility at city hall?

Ford: Can he be good for us? 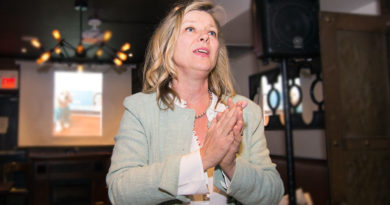