But after city council approved the sale of 22 Toronto Community Housing single-family homes whose rents were geared-to-income, she’s going to have to.

Bleary-eyed and exhausted after a 16-hour shift, all Baird can do is shake her head and sigh.

“Since they’ve started with the housing (sell-off), I’ve had a permanent headache,” she said.

Baird and her three grown children have lived at 8 Ellerbeck Ave. for the past nine years. Baird, a part-time nurse at Scarborough General Hospital, pays more than $1,000 a month in rent, utilities not included.

After receiving notice of the sale two weeks ago, Baird has met Toronto Community Housing staff to make arrangements for her move, which she’s been told could happen as soon as the end of August. So far, none of the accommodations she’s seen meet her family’s needs.

Her eldest son, 22-year-old Lamar, is developmentally delayed and requires constant care, which prevents her from working fulltime. When she is on her back-to-back shifts at the hospital, one of her other children minds Lamar. She says she needs the space her current home provides and adjusting to her new digs will be a challenge.

“Sometimes it feels like no one can help,” she said. “No one’s listening.”

Sale of the homes is projected to generate more than $15 million for Toronto Community Housing and is to be used to repair existing homes and build new ones.

Former mayor of Toronto and housing critic John Sewell isn’t so sure that’s where the money will really be going. He said he suspects the money will be used in the city’s operating budget instead of its intended target.

“All the signs are the city is very short on cash, ” he said. “They’re selling off all their assets.”

News that the Toronto Community Housing owns homes in pricey neighbourhoods has provoked the ire of many residents, who do not believe the city should offer single-family dwellings at below market value.

In Baird’s neighbourhood, houses can fetch a million plus.

Since moving in almost a decade ago, she’s done her best to make her home attractive, she said. She stripped paint off the staircase to her two-level home and porch, replaced carpets, painted walls, installed a new bathroom sink and furnace: all paid for out of pocket.

Now, Baird’s home and the neighbouring houses at 6 and 10 Ellerbeck Ave., which Toronto Community Housing says are dilapidated, will be sold to private buyers. That concerns Ward 29 councillor Mary Fragedakis.

Fragedakis, who voted against the sale, is concerned the three homes will be bought up by a developer who may be more concerned with the bottom line than constructing something to fit the character of the neighbourhood.

“Essentially, what they’ll be doing is blockbusting,” said Fragedakis. “It’s lucrative for developers, but it doesn’t support good, healthy neighbourhoods. It destabilizes them.”

Baird may have the councillor’s sympathy, but she knows she doesn’t have much time left to sort through her things.

“I’m anxious to go. I hate to be unsettled,” Baird said. “But the place has to be right.” 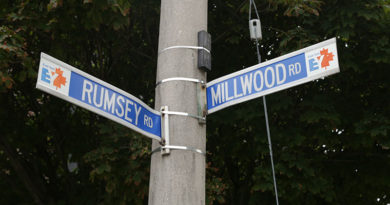