When Duncan Macdonald started high school five years ago, he was nursing a broken jaw from a summer water-skiing accident.
It may have been a blessing in disguise.

Crescent School has been heavily involved in robotics for 11 years, ever since they added it onto the Bayview and Lawrence Ave. school’s science wing. The school has also competed in provincial, national and international competitions.

“Anytime you can have them compete as a team in hands-on work they learn without knowing it,” Morrison says. “We noticed a big improvement in terms of some of the soft skills with becoming organized, hitting deadlines, leadership (and) communication.”

The biggest competition Crescent school participates in is the FIRST (For Inspiration and Recognition of Science and Technology) Robotics competition. Run by an education-based charitable organization from the United States, First Robotics pitches a challenge to interested schools in January, providing a kit of parts and a common set of rules.

What follows is an intensive six weeks of design and creation. At Crescent, all of this is done on top of regular schoolwork. The challenge culminates with a championship in Atlanta, where the ’bots are put to the test and winners are crowned.

This past year, students worked on Coyobot 10, which took home second prize in the Greater Toronto Regional competition and was awarded the Motorola Quality Award. The robot required a trailer attachment and the ability to drive around, collect balls and shoot them into an opposing robot’s trailer.

An interesting obstacle was a slippery game surface, so teams had to find a way to maneuver the ’bot.

With science and tech becoming an increasingly popular pastime for students, many variations of robotics competitions headed by different organizations are cropping up. Crescent itself hosts Ontario championships annually.

The group collaboration on projects is amazing to watch, Morrison says.

“Once they get hooked, they love it,” he said. “That atmosphere of taking the excitement of a sports game and putting it into science is the whole pulse.”

“The only hurdle for people joining in the upper school is the time commitment because it’s a condensed season, so it’s long hours everyday,” Macdonald said. “We come in on Saturdays too.”

Like Macdonald, the program also turned Ojo onto his post-secondary career, as he is pursuing the same course of study at McMaster University.

Both students also mentored the younger grades by heading up a robotics tournament.

“If you can put this much time into a project and keep your marks up, it’s got to help somewhere,” Ojo says.

To get their feet wet, Crescent introduces those in grades 3–6 to robotics through Lego systems, where they study the basics, like sensors and motors. Unlike the First Robotics team from the upper grades, the Lego competitions involve both class and extra-curricular time.

Morrison admits the time and cash commitment to robotics can be hefty at times. He said Crescent relies on donations and fundraisers to withstand the cost of competition.

But that doesn’t stop schools with smaller budgets from getting involved.

At Toronto District Christian High School in Woodbridge, the co-curricular robotics program has been going for the last two years.

So far the club is sticking mostly with Lego Mindstorms, a product line from the Danish toy company’s robotics department.

Teacher Dave Robinson, who started the robotics club at the school, also linked up with university mentoring programs, which will lend out kits free of charge, help sponsor competitions and hold free tutorials.

He agrees with Morrison that boys especially adapt positively to the way robotics is taught and the level of responsibility they’re given. But make no mistake; girls are just as into it, Robinson adds.

“It’s just exciting to see what young people can do when given the freedom to explore and to develop their gifts,” he said.
Robinson hopes to expand the program so that more students participate.

“You’d see kids who would just float because they were naturally gifted enough to just get by,” he said. “Suddenly they’d say, ‘I want to work hard’.”

February 14, 2012 Town Crier staff Comments Off on This robot does compute 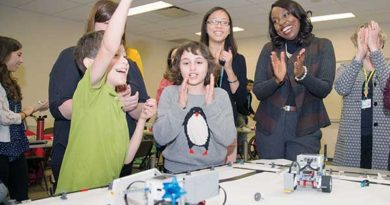