Residents are suggesting that a nearly 100-year-old railway artefact be designated as a heritage property, but the city says it’ll cross that bridge when it comes to it.

Don Mills resident Karl Frank, along with chair of the North York Community Preservation Panel, Geoff Kettel, is asking the city to designate the Bond Park bridge near Leslie Street and Bond Avenue as a heritage property.

“The bridge will be 100 next year,” Frank said. “It’s truly a heritage feature in Don Mills.”

The future of the Bond Park bridge was put into question as a result of the CN Leaside Spur Line, a mixed-used trail running between Eglinton Avenue East and York Mills Road, east of Leslie Street, through Bond Park. The spur line was created to fill a gap in the Don River bike path, and was formerly a piece of unused railway purchased from Canadian National.

The original intention was to demolish the north abutment and put signage that would explain the bridge’s history and significance.

But a presentation by Frank at a public consultation meeting convinced former councillor Cliff Jenkins to make a motion asking council to leave the bridge there temporarily.

“We’re proceeding on that basis,” said the city’s supervisor of capital projects, David Nosella. “We’re leaving the bridge there, we’re basically working around it.”

As it stands, the Leaside Spur Line is paved on one side of the bridge and gravel on the other. Construction delays have held the project back.

“I won’t lie and say it’s not causing us headaches, because the sightlines at that intersection, where the bike trail meets that driveway into the Bond Park parking lot, there’s a bit of a blind corner there,” Nosella said. “Quite honestly it is kind of awkward.”

Now residents such as Kettel are wondering if the bridge could be demolished in the future to speed up the process. But Nosella said there’s no need to worry.

“As the second phase currently stands, yes it will stay as is and we will construct the trail around it,” Nosella said.

While it’s somewhat reassuring to Frank that the city has said they will not demolish the structure at this point in time, he believes it should be designated as a heritage property to prevent future demolition.

“That bridge is the only symbol that is left to indicate Don Mills heritage,” Frank said. “The shape of Don Mills was derived from the railroads … The bridge will be the only heritage structure left having been designed with the old railroads in mind.”

Frank said he feels more structures in North York need to be preserved in order to retain the neighbourhood’s history.

“We’re designating heritage properties here in Toronto that are 50 or 60 years old,” he said. “But here’s a 100-year-old structure, and the railroad has played such an important part in this country. We should have a reminder of it.”

The North York Community Preservation Panel is currently working to designate the bridge under Toronto’s inventory of heritage properties.

Ward 25 Councillor Jaye Robinson said she would support whatever decision the panel comes to.

“It if is indeed historically significant, then I think it should be designated,” she said. “If the North York (Community) Preservation Panel feels that it’s not, then I don’t think there’s an issue with demolishing it.”

Brian Scott, an East York resident who could be seen walking the Bond Park bridge on a sunny October day, said he is in favour of keeping the bridge but wouldn’t be surprised if it was demolished in the future.

“The city doesn’t see the value of preserving things like this,” he said.

“What with the Rob Ford administration, they may put a toll on it,” he said with a laugh. 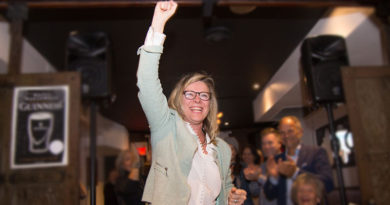 A new captain takes the helm in Ward 25

November 4, 2010 Town Crier staff Comments Off on A new captain takes the helm in Ward 25