For Nina McCreath, books are like an extended family. She loves them, knows what’s going on in their ink-and-paper lives, and tells her friends about them.

Her devotion was palpable on the last Friday of May, as she went through a list of summer reading suggestions to a full house of rapt customers for the last time.

After eight years of carefully providing reading material for bookworms and casual readers alike, the Flying Dragon bookshop at Bayview and Eglinton avenues is reluctantly closing its doors.

As if the occasion wasn’t already bittersweet enough, the shop recently won a Libris Award from the Canadian Booksellers Association for specialty bookseller of the year for their work with children’s books.

A drop in sales since January forced owners McCreath and Cathy Francis to face the fact that changing technologies like e-books and e-readers don’t yet generate profits for individual booksellers.

And the two women got into the business to connect with people, not screens.

“The fun and the enjoyment for us was in the tactile, sensory experience of the books and the opportunity to recommend them to the right people,” McCreath says.

When they started out, McCreath and Francis were just two friends in the publishing business who got together for lunch one day.

But book lovers should be grateful for that meeting.

They came out of it with an idea to spend a year developing a business plan for a bookstore.

“We were looking for something that we could really sink our teeth into,” McCreath says.

The two women threw themselves into creating a refuge inspired by Eastern European fairytales, which would turn out to be just as attractive to adults as children.

“We wanted to create an oasis that was child-friendly, not child-like,” McCreath says.

The pair handpicked every book they would stock and even wrote a column on children’s books for the Town Crier. Francis marshalled her design talent to figure out how to decorate the shop, creating a book of inspiration the two could use for ideas about the way they wanted their store to look.

Opening the shop’s door feels like stepping into another world. Books carpet every surface. Plush forest-green couches and a red velvet corner seat invite visitors to settle in for a good read.

Developing the talent to put the right book in the right hands was the owners’ next mission.

“This would be our trademark,” McCreath says.

Customer Joy Reddy, who has been frequenting the shop for the past five years, can attest to that. She’s always relied on the Flying Dragon team to pick the perfect books for her grandchildren when they visit.

“It’s the personal touch,” she says. “They’re like family.”

Long nameless until just before opening, the fairytale bookshop finally got its moniker from a Christmas ornament Francis gave McCreath.

It was a dove with a medieval village nestled on its back. Somehow, that dove became a dragon and the thought took flight.

“We liked the idea of the dragon flying with the imagination of reading,” McCreath says.

That imagination came to life at the Harry Potter parties McCreath and Francis threw for the release of the last two books in the wildly popular series. Kids unable to wait until morning to start reading came dressed in costumes of the famous teen wizard.

“It was a magical feeling handing the first book to the first child in line,” McCreath says.

The pair has watched many children grow up in families that have been customers since the beginning.

Mother Ann Rowe has visited the shop throughout its eight-year existence, and credits McCreath and Francis with turning her three children into readers. “My kids love literature because of them,” she says.

The owners had hoped to continue encouraging children for the rest of their lives.

“We thought we would be there, toddling in when we were 80,” McCreath says.

Despite the very real reason for closing now, the owners haven’t given up on the Flying Dragon permanently. They hope it might be possible to reopen in another form someday, McCreath says, advising devotees to watch their Facebook page.

“We’ll try to see where the Flying Dragon might fly again.” 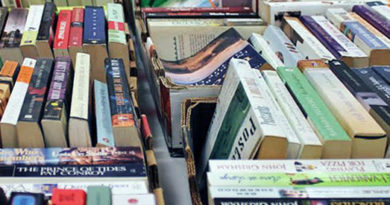 A study of colourful characters

March 1, 2011 Eric McMillan Comments Off on A study of colourful characters