In Lawrence Heights, many of the houses look the same. Row after row, they’re all made predominantly of bricks, and are shaped like squares.

Behind the doors, many of the people have similar stories: struggling to make ends meet, wondering when the next paycheque will come, and looking for ways to better their lives.

But it’s a different story behind the door at 37 Varna Dr.

“It’s a safe haven,” says Andrew Cox, a youth mentor for Toronto Community Housing, which has an office in the basement. “It gives the community a sense of ownership, peace, empowerment knowing that there is an office you have access to.”

Since about 2004, the home has been used as a rent-free grassroots space. Featuring about a half dozen offices for organizations such as Toronto Community Housing and Toronto Employment and Social Services, other groups can use the space for meeting and planning in what would normally be the home’s living room.

“Any group that needs a place to work, if it’s available, they’re welcome,” Cox says. “It’s not discriminatory, it’s available for all.”

Cox, who lived in Lawrence Heights for almost 20 years, but now resides in Brampton, says it’s important to have a space like this, even though there is already a larger one at 10 Old Meadow Ln. just down the street.

“That’s the main location for meetings and what-not so this is secondary,” the 29-year-old says, adding it’s the more low-key location of being in the middle of a neighbourhood that attracts him. “It’s good to have this space in the community so you don’t have a disconnect.

“I feel like residents want that tangible feel to the work, that they can go outside and Andrew’s right around there,” he continues. “It’s right here in the heart of everything,”

“And it’s a place to come and get your work done,” adds Jacquline Dyer, another youth mentor for Toronto Community Housing.

Dyer, 22, recently moved to Lawrence Heights from another high needs area, Neptune Drive, just north of Lawrence Heights. Coincidentally, 37 Varna Dr. is the home her father lived in for part of his childhood.

Though there’s always lots of work to be done, Cox says his motivation lies in seeing the results of having done something good for the community.

“I truly believe if you love your work and do it to the best of your abilities and you strive to become better and do the best you can, the results will show,” he says. “Especially if you’re doing it from your heart, because the dedication will show (like with) the extra time you give to a troubled youth who just won’t get it.”

Of course, many people know Lawrence Heights, also known as The Jungle, because it has grabbed headlines in the past for robberies, shootings and murders.

But back in September, the new unit commander at Toronto Police’s 32 Division, Sam Fernandes, told the Town Crier the crime rate had dropped significantly, and a lot of it had to do with work at the grassroots level.

Cox can attest to that.

“This community does a lot of things, it’s very active,” he said, citing various community-based groups and plans for the coming year. “You can’t get us down here, we get right back up.”

Admitting he was once headed down the wrong path, Cox says knowing where he could have ended up drives him to try to help the area’s youth to find the right path for themselves.

“That’s pretty much the basis for my work,” he says. “You’ve got to paint a picture — where they’re at now, where they’re going to be if they continue on that path, where they want to go.”

Cox says a lot of the trouble in getting through to the young people is they can’t relate to those trying to talk to them. That’s why Cox says his past helps.

Though Cox says not all of the youth latch on to the message, some are getting it, and that’s what’s most important.

“I’ve got a lot of work to do as far as showing the other youths the path out, the path to independence, financial security, that sort of thing,” he says. “And even when I’m gone, there’s going to be someone else that has to do it who I’m hoping to form, shape and mould into that next leader.” 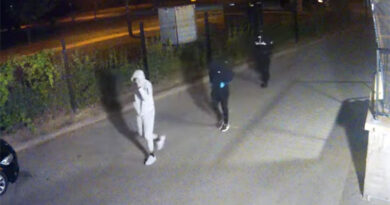 March 7, 2020 Vatché Ayvazian Comments Off on Arrest for theft and mischief after underground garage break-ins