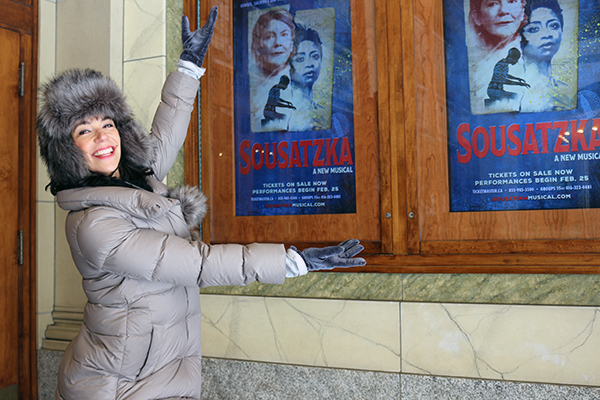 It was a surprise for Lawrence Park resident Allison McCaughey when she got the call to be an ensemble member for Sousatzka.

But, being a member of a large-scale, Garth Drabinsky production is a pretty big deal for any theatre denizen in the city, and McCaughey’s friends have let her know.

“It’s a piece of Canadian history, for sure, in terms of musical theatre, and Garth’s big shows he did in the ‘80s and ‘90s,” she says, in an early March phone call. “It was a lost era of theatre. I heard so many stories about these beautiful big productions from a lot of my colleagues that are a couple of generations older than me.

“You’re a little envious that you weren’t around during that time, but it’s all coming back now, which is neat.”

McCaughey got the call while working on A Chorus Line in Stratford. For her Sousatzka was an opportunity to show off her triple threat talents: acting, singing and dancing.

The greatest moment for her, even with the intensive rehearsing since Dec. 9, has been the entire cast booming in harmony.

“There are 47 of us out there, and we’re all singing these beautiful, elaborate harmonies, and I think that is the most exciting part of this show, for me,” she says. “It’s so powerful to hear 47 singers just blasting.”

But what touched her most was the story of Sousatzka, Based on the novel by Bernice Rubens, it deals with the story of a musical prodigy who must choose between the two influential women in his life: his mother and his piano teacher. Racial divides and political hurdles are bridged between South African and Eastern European cultures.

McCaughey’s own family made their voyage across Latvia to come to Canada.

In fact, the Lawrence Park home she lives in is her grandparents’.

“It resonated so deeply with me, because my grandmother had to walk across her country, Latvia, and she made her way to Canada, not speaking the language, not having anything, starting from scratch,” she says. “It’s also so resonant of the times. It’s what our country is built on — we’re built on immigrants. It’s unfortunate that people don’t want to open their eyes to that.”

When she’s not on the stage, McCaughey teaches dance at colleges and universities across the province.

Sousatzka plays at the Elgin Theatre until April 9.