In a move that should come as a surprise to no one, Premier Kathleen Wynne will be the Liberal candidate in Don Valley West when the next provincial election is called.

Wynne, MPP here since 2003, was announced as the candidate by the Don Valley West Liberal Riding Association on March 1 during an event at Leaside Memorial Gardens that her constituency office called “just a formality.”

Blackmore, 32, who was named successor to outgoing president Matt Hirashi in a Feb. 20 vote at the association’s general meeting also in Leaside, says Don Valley West “was a conservative riding for a long time, and we think it will be again.”

He says he expects his immediate focus to be on galvanizing support for candidate David Porter, an Aurora-based accountant who he describes as “the kind of candidate you’re really pleased to have.”

Blackmore refers to himself as “hyper-local.” He grew up in the Yonge and Lawrence area and co-runs a software development company near Eglinton Avenue East and Redpath Avenue. A grandson of John Black Aird, one-time Liberal Lieutenant Governor of Ontario, he says his conservative leanings are a matter of “personal choice.”

“As a business owner — somebody trying to employ people and grow the economy — the Progressive Conservative platform speaks to me,” Blackmore said.

The new association president could not furnish figures to show “percentage-wise” his party’s chances of ousting Wynne in Don Valley West, but said “it’s not unheard of for a party leader to be bounced from their own riding.”

— With files from Eric Emin Wood

October 6, 2011 Town Crier staff Comments Off on It's all over but the counting 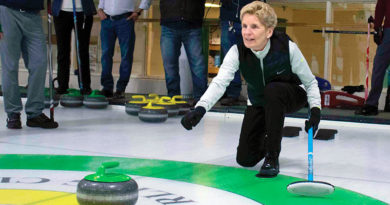