The Toronto Public Library is unveiling a digital map marking landmarks in the city, including midtown Toronto, that are referenced in the works of local poets.

The poetry map, went live earlier this month but will have its official launch in a 6:30 p.m. ceremony Wednesday inside atrium at the 789 Yonge St. library.

It is the culmination of the efforts of Mary-Beth Arima, who was the project lead, along with the library’s website team and Toronto poet laureate George Elliottt Clarke, who had contacted the book repository with the idea in 2013.

“[Clarke] had collected over 150 poems for us that he wanted somehow mapped on our website,” Arima said. “The timing was quite interesting, because that year we were producing a literary map where we placed novels, short stories and memoirs in specific neighbourhoods.”

Arima noted midtown is under-represented on the map, due in part to Clarke’s selections not taking in those neighbourhoods, and because further suggestions have not yet been made.

The public is encouraged to submit poems. Ssuggestions can be made through the Add a Poem section on the website. North Toronto native Katheri Lanthier’s work describing The Beaches in her book Reporting From Night has been put forward.

Already representing midtown are Margaret Atwood’s “A Bus Along St. Clair: December,” Phyllis Gotlieb’s “Thirty-Six Ways of Looking at Toronto Ontario”, which talks of Lonsdale Road, and Dennis Lee’s “When I Went Up to Rosedale”.

“We could use more in the midtown area,” Arima admits.

Putting together the website has been enlightening, Arima said.

“Before I started this project I had never — no, I hadn’t had much poetry reading — and it was a really wonderful experience,” she commented. “I highly recommend people check it out and look at all the wonderful poetry we have about Toronto.” 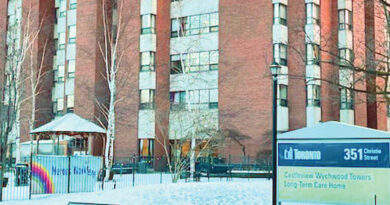 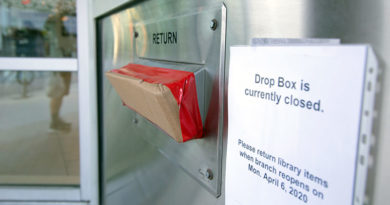 May 22, 2020 Eric McMillan Comments Off on Curbside service coming from public libraries