Condo dwellers in South Swansea are lamenting the loss of a neighbourhood shopping plaza as developers prepare to build a pair of residential towers with limited retail space in its place.

Residents living adjacent to 34 Southport St., near Windermere Avenue and The Queensway, say they are sorely missing local amenities in an area that has seen steady population growth in recent years.

Now a vacant lot, 34 Southport St. was once a commercial plaza with a grocery store, bank, drugstore and smaller shops.

In August, developers State Building Corporation submitted an application to build two condominium buildings — one 25 storeys, the other 30 — that would include some at-grade retail space.

Though there are worries about added traffic and density, it’s what the proposal is lacking that really concerns local resident Veronica Wynne.

The group is urging State Building to modify their blueprints to include more shopping amenities.

Though State Building applied for a re-zoning amendment to provide 970 square metres of retail space, the existing zoning bylaw requires a minimum of 2,385 square metres.

Though the plaza was torn down between 2008 and 2009, the last piece of commercial property, a Shoppers Drug Mart, was demolished in November.

Currently, the nearest grocery store is about 1.6 kilometres from the neighbourhood, says Wynne, adding it is too far for many in the community.

“About 20 percent of the residents in the area are seniors so they are really keen to have some place they can just walk to.”

According to a developer-commissioned commercial market study of the area, factors like poor exposure to passing traffic and an increasingly competitive retail environment placed challenges on the former plaza in recent years.

In response to concerns put forth at an Oct. 5 public meeting, State Building vice-president Michael Clark said in late December they are looking to increase retail space from 970 square metres to about 1,300 square metres.

However, meeting the current zoning requirement would be difficult.

“The problem is that because it’s on a side street, major retailers will not locate there,” he said in late December.

He said the Southport site would be better suited for convenient commercial uses, such as a café and other service locations like a hair salon.

“As opposed to a supermarket we believe we can get a green grocer-type tenant to go in there,” he said.

But Wynne contends there is a need, noting the former plaza was built before most of the surrounding residential area was constructed.

In response to the commercial study, Wynne’s committee commissioned a peer-reviewed report that also found the area is still a viable market for local retail.

The report, by retail consultant John Winters Associates, found that given the neighbourhood’s density, the local community could support a retail area of more than the minimum trade lands zoning requirement, which was determined at a 2003 Ontario Municipal Board ruling following a previous landowner’s re-zoning application.

“Today, there is no other central location to provide frequently occurring convenience needs of a large number of people,” the report read.

Wynne says developers have a community obligation to be a good neighbour.

“We want to work with the developer so this development complements the neighbourhood rather than challenges it.” 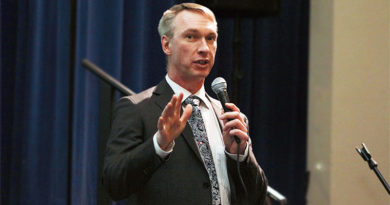