Morra was featured in the Town Crier almost five years ago when he was retiring due to poor health.

“Leo” closed his doors March 26, 2011 following a two-day goodbye event, where the then-74-year-old had invited many longtime customers by telephone.

Morra first worked as a barber at a shop near Eglinton Avenue East and Laird Drive in the mid 1950s, where he stayed until a fire burnt the building down in the late 1980s.

From there, Morra moved into Sunnybrook Plaza, where LeMan’s Barber Shop stayed for more than 20 years.

At the time he closed his shop many customers shared personal stories of their trips to get a trim from Leo, including some who still came regularly despite living as far away as Unionville and Orillia, another family who had four generations receive haircuts from Leo, and tales of the barber’s good character.

Morra sponsored kids’ sports teams in Leaside, ran a barber shop for veterans at Sunnybrook Hospital on his days off for a time, and made house calls to some elderly customers.

His only daughter, Antonella, recalled jokingly at the time that he may be the only man to give his daughter a mohawk.

“That was the best haircut my dad ever gave me.”

Leonardo Morra, (Dec. 20, 1936 — Feb. 24, 2016) age 79. Loving husband survived by his wife Guerina Morra. Cherished father survived by his only daughter Antonella Morra. Beloved Nonno of Aria Mozzone and AJ Morra. He lost his 15-year battle with cancer and died peacefully at Village of Humber Heights. Leo ran LeMan’s Barber Shop at two locations in the Leaside community for over 50 years. There will be two viewings at DeMarco Funeral Home at 3725 Keele St. on Feb. 26, 2–4 p.m. and 7–9 p.m. The funeral will take place on Feb. 27 at St. Charles Catholic Church at 811 Lawrence Ave. West (at Dufferin Road) at 10 a.m. The burial will follow at Highland Cemetery, 33 Memory Garden Lane, in Willowdale. For further information, email toni_to_tiger@hotmail.com. 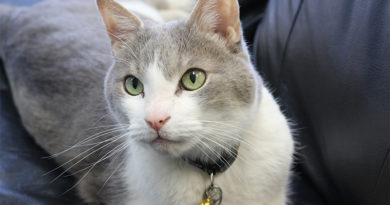 May 24, 2018 Brian Baker Comments Off on Twist remembered by animal hospital and community