By the age of 21, Betty Rich had survived a cross-border smuggling, life in a labour camp, and the tragic loss of her family in the Holocaust.

It was a tale she found too painful to bear, until in her sixties when she decided to put pen to paper.

“I said ‘I have to write it down, because I may forget’,” says the now 88-year-old grandmother. “And I started writing. It took me a year.”

The result is Little Girl Lost, recently published by the Azrieli Foundation, a not-for-profit organization that records and shares Holocaust survivor memoirs.

In it, the Don Mills resident travels chronologically through her pre-war life as a young teen living with her parents and siblings in Zdunska Wola, a small Polish town, to her involvement in a Zionist organization, to her escape to Soviet-occupied Poland, where she worked in a labour camp. She also documents her journey home six years later, back to a place devastated by effects of the Holocaust.

Fleeing the Nazis at 16, Rich, then known as Basia Kohn, bid farewell to her parents and siblings and paid to be smuggled to Kuznica. Not long after settling there, Rich found herself uprooted again, when Soviet soldiers rounded up refugees, including Rich, in the middle of night and sent them to work at a labour camp located further north than Siberia.

Rich writes with candour about her observations of the people she meets, the hardships and the persistent feelings of isolation and loneliness that dog her all the while.

Rich says it wasn’t easy delving back into that period of time.

In the decades following the war, she actively tried to avoid talking about any personal events that took place prior to age 23.

She says some of the things she shares in the book, like the last time she sees her mother, to whom the book is dedicated, had never been spoken about before.

Rich also describes a grim scene, one that is all too familiar to many of her contemporaries. She tells the story of returning to Lodz, a town not far from her hometown, and heading immediately to a community centre where the names of survivors were papered on the walls.

“They didn’t tell you who didn’t survive because there were more of them,” she said of the dead.

There, she frantically searched, but no Kohns were on the list, save for her older sister, who Rich found under her married name. Eventually, Rich learned that of her parents and five siblings in Poland during the war, only her sister had survived the Holocaust. A much-older brother, who had moved to Israel before the war, was also still alive.

“This was my first encounter with the truth, the first day I came back,” she recalls.

To this day, Rich doesn’t know exactly how her parents and siblings perished in the Holocaust.

“I didn’t want to know how they perished and as for survivors, they tried to tell me and I said ‘don’t tell me’,” she says. “I decided that I have to live with it inside of me, accept it and not allow it to kill me as they killed my family.”

Eventually, Rich married and after another harrowing journey, immigrated to Canada and settled in Toronto where her husband David’s family was located.

Though she started writing her book in 1988, Rich had begun keeping a journal years before, when tragedy once again entered her life.

In 1971, David drowned while swimming in Muskoka, where the couple had been vacationing.

The devastating loss of her husband led Rich to seek professional counselling. It was when she matter-of-factly discussed her formative years during the war that a therapist suggested her deep-seated feelings of loneliness went back much further than the loss of her husband.

Rich says at the end of the day, her book is like a survival kit of sorts.

‘We can’t get back the dead, but we can make the life of other people more livable,” she said. “This is what I think I accomplished.”

A book launch for Little Girl Lost was held at Bayview Country Club on Nov. 13. The event capped Holocaust Education Week in Toronto. 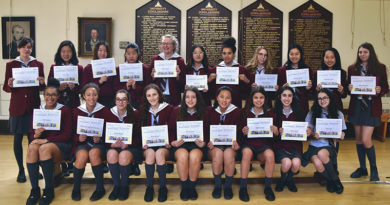 Death to the bard

October 20, 2011 Town Crier staff Comments Off on Death to the bard

June 5, 2012 Town Crier staff Comments Off on Reflections on the musical history of North Toronto Collegiate