On Nov. 18, while out for his usual walk, Bacon was met with yellow police tape, firetrucks and officers in hazmat suits milling about.

Earlier that day, police cordoned off the street as they investigated two homes, 438 and 440 Woburn Ave., allegedly being used to produce and store methamphetamine.

“I never saw anything suspicious,” Bacon said, surveying the scene.

“It’s quite an odd place for this – the area has lots of kids, young families, private schools and has become quite trendy.”

The meth lab was discovered by firefighters after they received a call from a neighbour who smelled acetone in the air at around 2 a.m., police said.

No one was inside the home at the time of discovery and no arrests have been made.

The investigation is still in the preliminary stages, Detective Sergeant Jim Qualtrough, of the Toronto Drug Squad, told reporters outside the homes hours after the discovery.

Qualtrough said officers found evidence to suggest the two rental units were outfitted to produce the drugs and equipped to store them.

Police closed off a block of the residential street, and evacuated people living in the neighbouring four or five houses.

The evacuation was precautionary, as chemicals used in making methamphetamine are potentially harmful when airborne.
Residents will be allowed back in their homes as soon as the cylinders are removed.

Carolyn Velkes Hyman and Theresa Hanson are both residents of the area and often walk along Woburn Avenue to take their children to school.

Velkes Hyman said although it is an upscale area, “it doesn’t mean that people won’t do anything illegal.

“There’s a stigma that drugs are in lower income areas, but it can really happen anywhere.”

Added Hanson: “This is a perfect place to do this because no one will suspect it.” 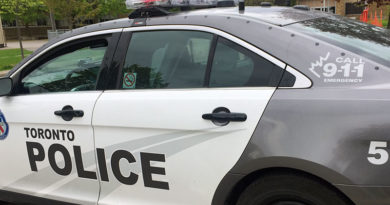 May 25, 2020 Eric McMillan Comments Off on Two teens wounded in Thorncliffe as shootings erupt across city