Urban planner Terry Mills predicts that, in the next decade and a half, six new buildings will be constructed near Yonge and Eglinton, in an area the size of City Hall and Nathan Philips Square, resulting in an influx of what he considers a “conservative” estimate of 15,750 new people.

He worries that the resulting intensification is more than the city has adequately planned to accommodate.

“Intensification’s about increasing magnitude,” Mills says. “Consolidation is about how you fit things together… and at Yonge and Eglinton there’s very little thinking about how things are going to fit together.”

Three of the new buildings he refers to — a 39-storey condominium at 36 Eglinton Ave. West, multi-storey additions to the Yonge-Eglinton Centre and the future E Condos tower — are already under construction or have been approved.

Basing his averages on existing applications and city guidelines, Mills estimated that if developers built 30-floor towers on each of the 34 sites, with 10 units per floor and 1.5 people per unit, it would add up to his estimate of 15,750 new people living at Yonge and Eglinton over the next decade and a half.

The key word in the report, Mills says, is “consolidation,” which he contrasts with “intensification”, a synonym for development used in the city’s Official Plan.

Keesmaat says Mills’ report is overestimating, but acknowledges the 6,964 units represented by eight of the 37 proposals currently under construction and 10 having been approved is “a lot of growth.”

Nineteen others are under review.

“But a proposal doesn’t necessarily turn into a project,” she points out.

Much of the area’s growth is by design, Keesmaat says: the Yonge-Eglinton Secondary Area is one of four “high-performing” locations outlined in the official plan. The others are North York Civic Centre, Scarborough Town Centre and Etobicoke Civic Centre.

With several apartment neighbourhoods nearby, more available building sites than Yonge and Bloor and the Eglinton Crosstown LRT scheduled for completion by 2020, developers find the area even more attractive than downtown, Keesmaat says.

Mills says the disparity between his projections and Keesmaat’s is due to the city counting only open applications. He believes both approaches are valid.

“I’m working within a five-block radius of Yonge-Eglinton station over a 15-year horizon,” he says. “She’s using a broader area, but only dealing with projects that can be formally identified.”

Mills fears the city hasn’t effectively planned for several challenges he expects it will face in the next decade and a half, including infrastructure and traffic.

“If you add even 15,000 people in that area, it’s really the size of a small town,” he says. “The city’s very reluctant to talk about what this is going to mean in terms of schools or social services.”

Sherwood Parks Residents’ Association President Ben Daube has similar concerns, but with developers, saying that too many of them consider only the impact a building will have on its immediate site, rather than its impact along with its neighbours on an area.

“I think my greatest concern is that developers and public planners are not talking and communicating as well as they should,” Daube says.

In an earlier interview, Daube mentioned that during a morning rush hour many commuters at Eglinton subway station must wait for three trains to pass before stepping on and that the addition of 15,000 new people to the area would make it worse.

“There is no plan approved yet for dealing with that congestion,” he says. “No plan at all.”

Keesmaat says the city recognizes the importance of monitoring urban development’s impact on local populations, and that the planning department is creating a framework to measure when an area is reaching its tipping point.

The Midtown In Focus project is part of the city’s efforts to establish that framework near Yonge and Eglinton, she says, with staff collaborating with a design team and members of the community to improve parks, open spaces and streetscapes in the area.

“If you get the density right… but you don’t add the corresponding public spaces that actually knit the density together… then you run the risk of the density not adding value,” Keesmaat says. 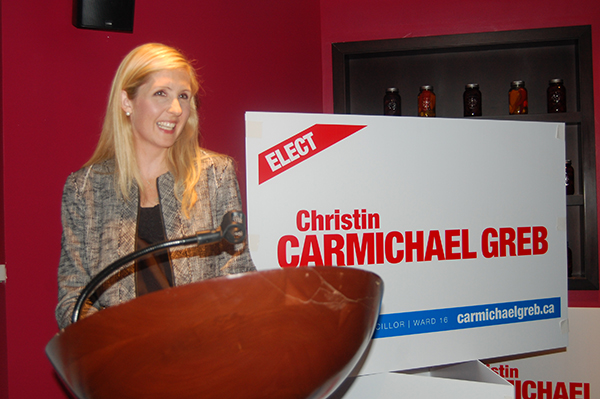 Carmichael Greb ready to get to work in Ward 16

October 29, 2014 Shawn Star Comments Off on Carmichael Greb ready to get to work in Ward 16

OneCity has support in Don Mills

July 10, 2012 Town Crier staff Comments Off on OneCity has support in Don Mills

One thought on “Midtown bulge is in our future”