Toronto’s police force is mourning one of their own today, after a 52 Division police officer was fatally struck by a stolen snowplow early this morning.

Sergeant Ryan Russell of 52 Division was an 11-year veteran of the force and the son of an officer himself.

According to reports, he was struck just before 6 a.m. at Avenue and Davenport Roads. while trying to stop the snowplow. He was taken from the scene to St. Michael’s Hospital where he was declared dead.

Later in the morning, Toronto police allegedly shot the driver on Keele Street between Annette Street and Humberside Avenue. He was taken to hospital with injuries.

“This is a very tragic day for the city of Toronto and the Toronto police service,” Chief Bill Blair told reporters earlier this morning.

Mayor Rob Ford released a statement offering condolences to Russell’s family on behalf of the city.

“Sergeant Russell is a shining example of the men and women of our police service who put their lives on the line to protect us each day,” Ford said in the statement.

“His bravery and service to the City of Toronto will not be forgotten.”

The city also lowered flags at Toronto City Hall and all civic centres to pay tribute to the fallen soldier. Premier Dalton McGuinty and leaders of the provincial opposition parties also released statements of condolence.

Sergeant Russell is the first Toronto police officer to die in the line of duty since 2002. 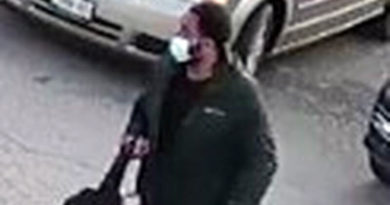