Illustrator and author Barbara Reid would be the first to admit she is still a kid at heart. And it’s thanks to this outlook on life that the Danforth-area resident received the Order of Ontario for her contribution to children’s literature both at home and abroad.

“I just never stopped enjoying reading children’s books and picture books,” said Reid. “I like artwork that tells a story.”

Reid’s signature plasticine artwork has been featured in nearly 20 children’s books, many of them written by Reid herself. Her books have been published in more than a dozen countries and for them she has won several awards including the UNICEF Ezra Jack Keats Award and the Governor General Award for Illustration.

At an investiture ceremony held at Queen’s Park on Jan. 26, Reid received her latest award from the province’s Lieutenant Governor, David Onley.

“It’s really nice to receive this honour,” she said. “It’s hopefully getting attention for the importance of children’s books and children’s culture because it’s really important and valuable so it’s nice to see that recognized.”

At a young age Reid had already decided her career path lay in books, but couldn’t make up her mind as to whether she wanted to be an author or an illustrator. She eventually chose the latter and enrolled at the Ontario College of Art and Design.

While there, she did work for magazines and other commercial jobs but later focused on children’s literature due to its longevity.

“I like that the books are around, if you’re lucky, for generations, compared to other types of commercial artwork that disappears,” she said. “With a book you have a chance of having your art stick around.”

A born and bred Torontonian, Reid has stuck around the Donlands and Danforth area for over 20 years. In fact, the surrounding neighbourhood was a source of inspiration for her recently released book, Picture a Tree.

“A lot of it is inspired by walking around the Brickworks and the Don Valley and there’s a street scene that looks like the Danforth,” said Reid. “So for anyone who’s from this neighbourhood it’s pretty familiar.”

Reid lives with her two daughters, who also serve as models and editors for her books, and her husband Ian Crysler. All of the plasticine pieces Reid creates are photographed for the books by Crysler, who is a professional freelance photographer.

“It’s fortunate because I don’t have to move the art,” Reid said. “It’s quite fragile so we set up the shoots at home.”

When Reid is not working on her art or spending time with her family she enjoys visiting schools and speaking with the children.

“I really enjoy meeting young authors and illustrators when I go in the school and I can see their artwork,” she said. “I find that really exciting because kids are really creative and talented.” 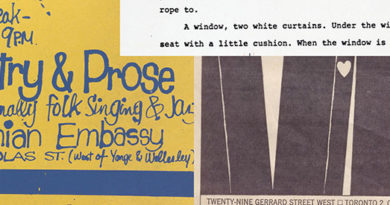 December 21, 2010 Town Crier staff Comments Off on The dating life of a Silver Fox