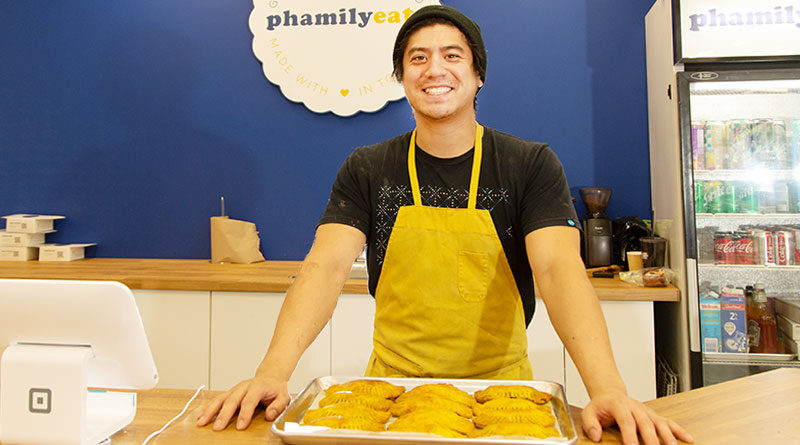 It was meant to be, Phamilyeats owner Peter Pham is convinced.

The bakery specializing in meat patties and pot pies, opened at 858 Eglinton Ave. E. in Leaside in July, after Pham survived a long-distance romantic relationship and recovered from a family tragedy.

His passion for food began at a young age, he relates. Growing up, he loved his mom’s cooking and frequently helped her in the kitchen.

In 2015, Pham was living in Hong Kong with his girlfriend (now his wife), working as a chef. As he did not have enough experience at the time to get a working visa, after a while he had no choice but to come back to Toronto and maintain his relationship with his girlfriend long distance for a few years.

Pham spent some time working in a restaurant as a chef. Around the same time, tragedy struck when his brother – who had also become his best friend – died.

“That was a tipping point for me,” Pham says.

Nowadays, Pham is cooking again, but this time it is “on my own terms,” he says.

“In the [restaurant] industry, you’re working on the average 60 hours a week, which is a huge sacrifice. You miss out on family gatherings, hanging out with friends.”

Another thing Pham felt he was missing out on was the opportunity to connect with customers. “As a cook, you’re kind of deprived of that experience.”

Also, he said, the salary in the industry is generally not good, even though you work yourself to the bone, he says.

After his brother died, Pham began drinking heavily, until it “got to a point where I was numbing my pain.”

It did not help that there tends to be a lot of substance abuse in some sectors of the restaurant industry.

Pham knew something had to change, he says, and he quit his job.

Developed his own recipe

He then spent some time working in construction, and in the scrap metal industry. With his girlfriend’s support and the help of a substance therapist, he was able to take a year off drinking.

During Pham’s time off from the food industry, a friend from high school who had moved to Prince Edward Island became pregnant. As she was having a lot of cravings, particularly for beef patties, Pham suggested they make the patties together over a Zoom call. When they did, Pham “fell in love with the process.”

Not long afterward, Pham developed his own recipe for chicken pot pies and started selling them to friends, family and co-workers, making them out of his condo kitchen. After a few months, word spread and his customer base grew. It was then that he decided to quit his full-time job and make his patties and pot pies full-time instead.

Conspiracy Pizza’s new space is now being shared with Phamilyeats along with an ice cream parlour, which made it possible to open during the pandemic.

Phamilyeats sells chicken and beef pot pies, as well as beef and vegetable patties, all made from scratch, and has recently added Vietnamese sausage rolls to the menu.

These days, Pham says, “Those same customers where I was dropping off are now coming in and it’s great to see them.”

Pham prides himself on the uniqueness of his recipes. Although he had a lot to overcome in order to get to where he is today, Pham grateful things worked out nonetheless.

“Every step of the way was luck for me,” he says. “The stars aligned.”