The residents took the opportunity to voice their concerns with the North St. James Town Lanterra development.

Ward 27 councillor Kristyn Wong-Tam and Toronto Centre MPP Glen Murray were sideswiped with the concerns about the project as neither expected to deal with it at this meeting.

“No one was prepared — that wasn’t the meeting’s purpose,” says Wong-Tam. “I don’t get regular updates. Murrary doesn’t get any.”

The development, which falls just outside of both Wong-Tam’s constituency and Murray’s provincial jurisdiction, is a four-tower condominium plan.

Although the Lanterra project is actually in Ward 28, the highrises will impact South Rosedale residences.

Currently, the four towers have been proposed to the planning board as being spread along Bloor Street E. from Sherbourne to Parliament, and ranging in height from 133 metres at the lowest to 159 metres at the highest.

That height is the main concern.

“What we have a big problem with right now is that the city planners signed off on the Tall Buildings Study as being an appropriate model for future development in the downtown core, yet we’re dealing with an application here, that apparently has no regard for that study,” says David Townley, president of the South Rosedale Ratepayers Association. “I think that’s the crux of our argument.”

Though he thinks it is a positive thing that the North St. James Town site is being developed, Townley says if the buildings heeded to the study, they would not have a problem.

“The scale of the building is extremely large and obviously people are very concerned about the buildings as originally proposed,” he says.

But the height is not the only concern with the project. Other concerns include the overlook into Rosedale, lack of retail space, the inability of Sherbourne subway station to handle the additional residences and the overall density of a project of this size.

“It’s going to be a lot of additional people potentially in the area and that will put an increased pressure on services,” Townley says.

Wong-Tam says she is fully aware of their concerns and adds that her biggest problem with the project is the shadow the proposed building will have. If the building’s shadow falls onto the Rosedale ravine, she believes this could have devastating consequences for the environment.

“This will change growth patterns, that ravine is connected to others,” she says. “We need to protect our natural assets.”

While Wong-Tam is not able to manage the proposal herself because it does not fall into Ward 27, she is in communication with Ward 28 councillor Pam McConnell, and is making sure McConnell knows Ward 27’s concerns.

“Not everyone will be 110 percent satisfied,” says Wong-Tam about the finished project. “But I hope it goes through some good revisions.”

Townley says his group will keep fighting until the buildings conform to the Tall Buildings Study.

“We are unhappy with the proposal and we’re not going away,” he says.

Glen Murray has no trouble in Toronto Centre

October 6, 2011 Town Crier staff Comments Off on Glen Murray has no trouble in Toronto Centre

The trouble with rubble

June 30, 2011 Town Crier staff Comments Off on The trouble with rubble 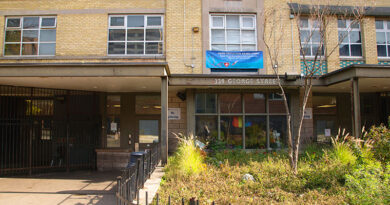