Leaside is the place that nurtured the imagination and prodigious nature of world-famous magician James Randi.

He was known as a child prodigy, and avoided elementary school, save for the tests. With a pass in hand to keep the truancy officers at bay, he spent most of his days exploring the ravines, climbing across the girders of the Leaside viaduct, and heading into the city to visit the Royal Ontario Museum, Toronto Public Library and the since-demolished Casino Theatre on Queen Street.

It was at the theatre he met magician Harry Blackstone, Sr., who told Randi to pay a visit to Harry Smith’s magic shop in the old Yonge Street Arcade at Temeperence Street.

Randi, 86, shared his anecdotes via Skype with the Town Crier in late August from his home in Plantation, Fla.

“I managed to scrape up 14 cents, and I went to see a matinee [at the Casino Theatre]. I went to see Harry Blackstone. And that’s not Junior, the son — I saw the old man,” he said. “He actually made a woman rise off a couch, and float into the air, and descend to the couch again.

“I became a magician because I was told by old man Blackstone to go and visit Harry Smith at the Yonge Street Arcade.”

Many of Randi’s tales, including a chemistry class experiment at Oakwood Collegiate that jarred Randi’s teacher, Mr. Kirby, are shared in the documentary An Honest Liar, which played at the Bloor Cinema in August.

“I found out at an early age — no, I’m not going to give out the formula for it — nitrous trioxide. It’s sort of a slate-grey powder. As a wet powder it’s perfectly safe, but when you let it dry, it crumbles away into dust, and it looks like dust off the floor.

“But, it’s highly explosive,” he said, with a laugh. “The slightest shaking will cause it to explode, and you’ll see this little brown puff of iodine crystals.”

“First of all, he’s just a fascinating character and he’s lived a really incredible life with all these adventures,” Weinstein shared, also on Skype. “There aren’t people like this around anymore who do upside down, straitjacket escapes — all the capers he was involved in.”

The duo shared Randi’s career from beginning to end, including his life in Toronto with siblings Angela and Paul, as well as his tour with shock-rocker Alice Cooper, the formation of the Committee for the Scientific Investigation of Claims of the Paranormal with the likes of Carl Sagan, Ray Hyman and Isaac Asimov, as well as his exposure of faith-healer Peter Popoff on the Tonight Show with Johnny Carson.

Still, Randi admitted the film is very candid, and has a few surprises that even made him balk.

“The film An Honest Liar, tells a lot of my story, and tells a couple of aspects of my story that I was loathe to accept, but I had made an agreement with Justin and Tyler that it would be warts and all,” he admitted. “I called them back after I had objected to it, and said, ‘Okay guys, that was the agreement, warts and all, so trot out the warts.’

“And they did. They put it in the film, and it was quite a shock to me to see it on the big screen.

“I did it because it was the agreement that I made with them. I wanted to tell the truth, nothing but the truth, so help me….”

Following a pause for effect, he adds: “No. I’m an atheist. I can’t do that!” 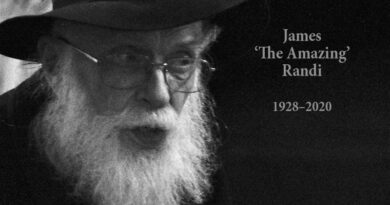 North Toronto and Leaside’s ‘The Amazing’ Randi dies in Florida

October 23, 2020 Eric McMillan Comments Off on North Toronto and Leaside’s ‘The Amazing’ Randi dies in Florida

December 13, 2011 Town Crier staff Comments Off on Line-change strategy the focus for Raiders

One thought on “Randi fondly recalls his ‘amazing’ Leaside roots”