Bikes lanes are back in the news, thanks to a recommendation to assess proposed lanes on Bloor Street, along with an already scheduled study of Dupont Street.

Meanwhile, lanes are under study for the Eglinton Crosstown LRT route across midtown.

Opponents of bike lanes on major thoroughfares may have thought they’d stopped cyclists’ momentum a couple of years ago when they removed recently installed lanes on three arterial roads in Toronto and blocked an assessment of lanes on Bloor. But this is an issue that won’t go away.

Everyone will once again get to sound off on the issue. Bike lane advocates are already pushing to add more streets to the assessment list, guaranteeing we’ll be listening to the arguments for years to come.

We’ll hear about traffic congestion attributed to cyclists taking road space from vehicle drivers. We’ll catch plenty about self-righteous bicycle riders who ignore traffic rules and endanger themselves, drivers and pedestrians. It’s all part of the war against the car, we’ll hear.

From the other side of the barricades will be heard protests that it’s drivers who are a menace to riders if they are unprotected by the white lines. Lanes, we’ll be told, help alleviate congestion by giving commuters a safer, healthier and cheaper way of getting around the city.

You might get the idea from the tone of the argument that it’s more a part of the culture wars than a reasoned evaluation of our transportation options. Seems you’re either a wine-sipping, bike-riding, downtown pinko or you’re an exhaust-sucking, horsepower-loving Neanderthal, probably from the suburbs.

But the funny thing is, both sides actually have some evidence to back up their more factual claims. A few people even have the ability to weigh the points regardless of their transit biases. We know cycling proponents who have come to oppose segregated traffic as creating greater dangers for all. And former anti-bike lane people who have come to recognize this two-wheeled trend is not dying but growing.

Painting bike lanes willy-nilly all over the city is not the answer. But neither is opposing lanes blindly.

The city of the future will involve more of us getting around by bicycle. With lanes wherever appropriate.

But also with education to teach drivers and cyclists to share the road safely.

Both with and without those solid lines separating them. 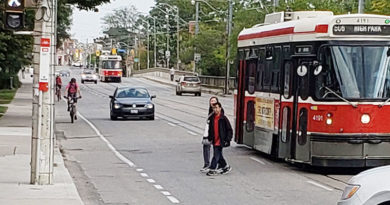 October 12, 2019 Eric McMillan Comments Off on New streetcar tech could get traffic moving

EDITORIAL: Lessons of the ice storm

January 9, 2014 Town Crier staff Comments Off on EDITORIAL: Lessons of the ice storm