When the idea of revitalization is brought up in Toronto the first word that comes to many peoples’ minds is controversy.

When a renewal project began in Mary Wiens’ Roncesvalles neighbourhood in June 2009 the first word that came to her mind was opportunity.

“We saw it as a golden opportunity to advocate for better tree-planting conditions,” Wiens said.

A journalist and producer for CBC Radio, Wiens is also a member of Roncesvalles Renewed, a group consisting of members of several local Business Improvement Areas. The group was formed to ensure that the renewal project would not stop trees from flourishing in the area.

On the weekend of May 14, only days before 30 trees were cut down in Regent Park to make way for a revitalization-related development, the Roncesvalles community was coming together to plant 13 new trees on the residential side of the avenue. Ward 14 councillor Gord Perks was on hand with members of the city’s urban forestry department, who provided the trees and also volunteered their time to help out.

Residents on Roncesvalles Avenue’s east side were asked if they would like to have a tree planted on their property. According to Wiens, some property owners made room for more than one.

On May 26, planting began on the mostly commercial, west side of the street. Trees were planted along the sidewalk where trees struggle to survive for very long. Most trees lining main streets rarely last more than 10 years, said Peter Simon, an urban forestry planner with the city.

“The reason why they only last 5–10 years is because the ground underneath the sidewalk is so compacted that the tree roots really don’t have much space to grow,” Simon said.

To counteract that effect, the sidewalks along Roncevalles Avenue have been designed and constructed in a way that provides a lot of uncompacted soil underneath.

“Every tree that’s been planted is going to reach mature size,” Wiens said. “That has never happened on Roncesvalles or, in fact, in most neighbourhoods.”

Last year, Wiens’ group also helped preserve a mature tree along the route that was in danger of being taken down. According to Simon, to redo the sidewalk, city workers would have had to cut into the cement, which would likely have severed the roots of the tree.

By installing a rubbery type of interlocking surface around its base, the tree was saved and is now the largest tree on a main street anywhere in the city, Wiens said.

But that is not the only unique part of Roncesvalles’ renewal according to Simon.

“I can’t say enough about Roncesvalles Renewed and the BIA,” Simon said. “They were really active and it wasn’t about stopping the project, it was about working with everybody and really contributing.

“There are other projects where communities are concerned and upset about the construction.”

Wiens said she thinks the positive outcomes of the Roncesvalles project should be an example that is followed citywide. She also praised the community’s engagement and said she thought without it the project would not have been as successful.

“The kinds of details that only neighbours and people who live there would kind of think to mention, they wouldn’t be captured,” she said.

May 18, 2011 Town Crier staff Comments Off on Cemetery goes green 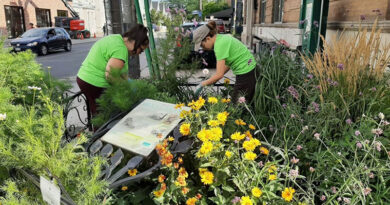