The commission looking into redrawing the federal riding boundaries in Ontario has recommended Toronto’s representation grow by two ridings which could mean as many as four new councillors at city hall.

Unlike the province, which ties its ridings to the federal map, the city has recently used those constituencies as a basis for creating its wards with two reps for each district.

While St. Paul’s councillor Josh Matlow said it is a possibility city hall could grow when the number of Toronto ridings are increased to 25, he stressed it’s not a done deal.

“It doesn’t have an immediate or necessary effect on city wards. City wards are defined by city council. However, the proposed or expected changes in Toronto ridings will certainly have an affect on the kind of discussion we as a council have on the possible redistribution of wards.”

Matlow said there has already been discussion around city hall regarding redistributing city wards, and now with the federal ridings set to change, he says it’s a good time for council to start talking about what changes could be made.

“What’s important for us as city council to consider is how to correct the current imbalance between wards with regard to population distribution,” he said. “There are some wards that are just having an increase in population while others have not.”

Matlow’s ward would be the most affected, as about half of it would end up in the new Mount Pleasant riding (which would take the eastern part of St. Paul’s and the northern section of Toronto Centre).

Matlow said council should be focused primarily on ensuring population is distributed equally among wards in order to allow for residents to have equal representation at the city level.

Public hearings about the proposed federal/provincial riding changes are to take place in the fall, with two in Toronto. This first is to be at the North York Civic Centre on Nov. 14 at 10 a.m., and the second is to be at Metro Hall on Nov. 15 at 11:30 a.m. 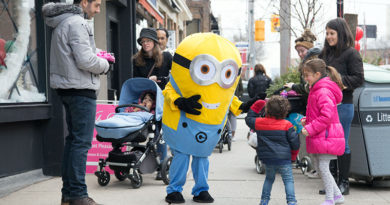 You meet the strangest people…

December 3, 2017 Streeter staff Comments Off on You meet the strangest people…

One thought on “Riding changes could mean more wards”