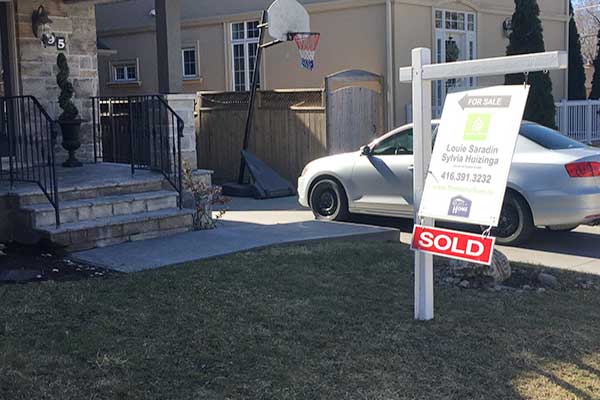 If you’re a midtown homeowner planning to sell and move out of the city, February’s real estate prices will give you reason to finally pack your bags.

If, however, you’re thinking of downsizing but would like to stay in your neighbourhood — or even the GTA — you’ll be facing the same problem homeowners across the city now find themselves grappling with: finding a new home for a low enough price to justify selling your old one.

“The real issue is what are they going to buy afterward?” he adds. “That’s resulted in a bit of a vicious circle where you’re seeing people deciding to renovate rather than list their home for sale.”

For homeowners secure in their decision to move to, say, Barrie, the numbers are spectacular.

(If that jump seems excessive, keep in mind the averages are based on the number and value of houses sold in a given month. In January only four detached houses were sold in the area, while 20 were sold in February.)

The lowest gains were posted in the Bridle Path, Sunnybrook, and York Mills area, where the average sale price for a detached rose from $3,978,120 in January to $3,986,692 in February.

These conditions have been typical for some time in midtown, Mercer says. It’s evidence of a tight market in the low-rise detached, semi, and townhome segments. But recently even condominium apartments are experiencing a drop in listings.

The silver lining is that if a homeowner — especially of a detached house — chooses to renovate rather than sell, the property’s eventual sale price apparently has nowhere to go but up.

“As long as we’re seeing the type of tight market conditions that we are, it’s difficult to forecast for anything but continued price growth,” Mercer says.