Sarah Jordan is a girl driven to succeed.

Thanks to the efforts of Sarah and her peers, at least 200 low-income families enjoyed a Thanksgiving dinner provided by Tremblett’s Valu-Mart and distributed by the Daily Bread Food Bank.

Sarah also managed to raise about 10,000 kilograms of food in her fifth annual food drive, nearly doubling her goal for this year.

“It was a little crazy, but really fun,” she said of assembling the holiday hampers.

She came up with the idea for a food drive after a dinnertime discussion with her mother about less fortunate families.

“The first year we went door to door, collecting food from our neighbours and putting up hand-drawn posters that Sarah did,” her mother Lynda Debono said. “Last year was really the pivotal change, when Sarah decided we’ve got to do something bigger.”

The event has grown to include three schools, about 1,800 kids, a local grocery store and community members.

“In Leaside and Davisville, events like this shows us we’re a community,” he said. “What’s interesting about Toronto is that people think it’s a big city, but when you get into certain subdivisions and markets, it really is like you’re your own little town.”

The scene inside the grocery shop was more hectic than usual for a Wednesday afternoon, as kids packed the aisles and filled hampers.

Local realtor Patrick Rocca decided to get involved because the food goes to the Daily Bread Food Bank, which helps families throughout Toronto.

“I’m a firm believer in all we do for the local schools and stuff, which is great, but we don’t necessarily really need it,” he said. “It’s the food bank that needs it, communities like Thorncliffe that need it.”

For Sarah, the food drive has provided her a better understanding of that need, and has also changed how she perceives the less fortunate.

“I’ve learned that there’s lots of people in need of food, and it’s really important to help them,” she said.

“And they’re not different than us. They’re just people who don’t have anything to eat.”

‘I wasn’t expecting this at all’

April 9, 2016 Philip Alves Comments Off on ‘I wasn’t expecting this at all’ 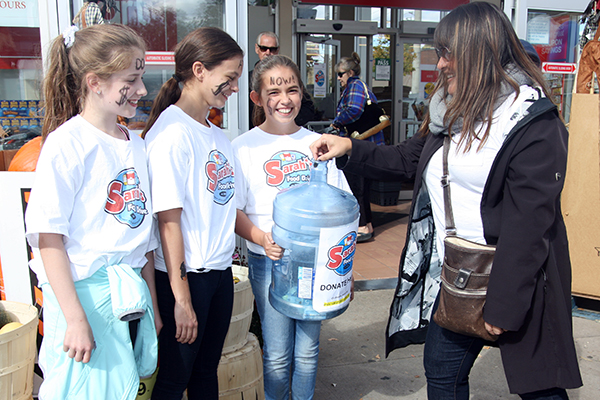