The Hungarian House is set for the wrecking ball as the new property owners begin planning for a mixed-use development at St. Clair Avenue W., near Atlas Avenue.

Though no formal application has been filed with the city, Tony Manocchio, Urbancorp’s vice-president of construction said they’re looking to build a condo complex with ground-level retail and commercial.

“We’re not quite certain as to the final details of the development in so far as built form, number of units and overall density goes,” he said in an email, adding right now they’re trying to work within the allowable zoning parameters.

Current guidelines for allow for up to seven storeys.

The developer is aiming to file an application with the city in late September of early October.

Manocchio said he has met informally with local councillor Joe Mihevc on two occasions, and also with residents to explain intentions for the site.

The demolition of the current golden-hued building appeared imminent in early September, with hoarding located around the property.

The Hungarian Canadian Cultural Centre has been a fixture in the community for about 40 years, but faced with decreasing membership and high maintenance costs, the Hungarian-Canadian community that operates it decided it was time to move out. The property was listed at $5.7 million when it went on the market in early 2010.

Urbancorp bought the property in an attempt to capitalize on what they call a St. Clair real estate boom, Manocchio said, pointing specifically to the growth at Bathurst Street.

“With the resurgence of St. Clair as a major avenue in the city, in our opinion, it just made sense for us to bring this type of mixed use to the area.”

Manocchio acknowledged that area residents, especially those just north of the Hungarian House on Barrie Avenue have expressed concerns about living adjacent to a major construction project for the next few years.

“It’s their backyard,” he said, adding Urbancorp is looking into ways to mitigate neighbourhood impact throughout the various stages of demolition and construction.

Mihevc says he expects to see an application with medium-density and “quality development, good architecture, that has a strong environmental side to it and fits into the neighbourhood.”

The St. Paul’s rep says there is healthy appetite for a condo in the area.

“There are a lot of people who are empty nesters who are looking to buy local,” he said.

The developers may also propose consolidating the Hungarian House lands with the TD Bank property just west of the property. Mihevc welcomes such a move, because it would mean vehicle access to the development would be located on Winona Drive, rather than St. Clair.

“We don’t want them to break up the sidewalk with a driveway on St. Clair,” Mihevc said.

According to Mihevc, if the properties were to be consolidated, the allowable height would rise to a maximum of nine storeys. 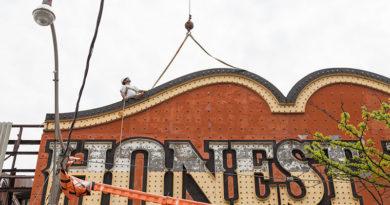 May 24, 2017 Streeter staff Comments Off on Iconic Honest Ed’s sign comes down

Save the MacLean house?

February 9, 2011 Town Crier staff Comments Off on Save the MacLean house?