Put 12-year-old award-winning composer Allison Winn alongside the Amadeus or Bach Children’s Choir and she’ll sing her heart out.

If she’s in the recording booth with broadcaster Andy Barrie in the CBC’s studio at 5 a.m., the scene might be a little bit different.

“They said here, sing your song for us a capella, to this tiny little kid, and she was just stonewalling him,” recalls Allison’s mother, Julie. “He was looking at his watch, shaking his head thinking ‘Oh my God this kid isn’t going to sing.’

Allison can be excused for being a little nervous the first time she was recognized for her song-writing abilities. After all, she was only six.

Now six years later and Allison is still racking up the wins (and hymns). She was recently one of eight winners for the Amadeus Choir’s annual song-writing competition, which celebrated its 25th anniversary this year.

Allison, who joined the Bach Children’s Choir when she was five, won in the child ages 10-12 category for her composition “Quittez Pasteurs”. The traditional choral piece about a shepherd is written in French.

Allison wrote the melodies and arrangement for the song. She decided to try a French piece because she understands and enjoys the language.

“I was trying to come up with something different I can do for my songs this year,” Allison said. “They’ve all been kind of one certain style, so I wanted to try something else.”

The young musician, who plays piano, trumpet, baritone, guitar and cornet among others, loves both writing and performing music. She’s looking forward to singing her composition on Dec. 17 at the Glorious Sounds of the Season performance, which features all the winning compositions along with other holiday favourites.

“When you win at the Amadeus Choir, you get to sing the song at a special Christmas concert,” she said. “It’s really cool being able to sing it with all my friends and everything.”

The performance features carols celebrating the winter solstice as well as traditional Christmas and Hanukkah themes. Choir member Joan Andrews said the event is always a hit because it gives the choir a chance to sing something different.

“We’re always excited to do the carol concert because it’s all new works,” she said.

At least partial credit belongs to conductor and artistic director Lydia Adams. She created the songwriting competition in 1987.

“Her artistic aims for the choir have been unique because she likes to feature young Canadian artists and composers,” Andrews said in praise of Adams. “And that’s why we do this competition.”

Watching Adams conduct at a practice, gently but firmly urging her choir to “go lighter” as they perform “The Shortest Day”, it’s easy to see why the group sings praises for her.

“She’s demanding in a really nice way,” Andrews said. “Her personality draws people out as well.”

Adams acknowledged her role in leading the choir, but stressed that it’s a collective effort.

“The spirit of this choir is just amazing,” she said. “One thing that’s really neat, and a little scary, after every concert now there’s usually at least one person who will come up and say ‘that was the best concert ever’ … It’s great.”

The choir has grown in size and profile over the years, and has a more selective admission process now as well as a membership fee.

But some traditions, like fostering talent among youth within the songwriting competition, remain unchanged.

“I think the reason Alli got into the choir is because I’ve been in it for so long,” Winn said. “The nature of the competition is to inspire or motivate people to share what might already be going on in their head musically.”

Winn, who has been with the choir for 21 years, hopes she’ll be able to say the same for Allison.

“I think she’s a lifer, as far as the choir goes,” she said. “I guess it’s a case of the apple not falling far from the tree.”

You can hear the Amadeus Choir perform their winning compositions at Glorious Sounds of the Season, on Dec. 17 at 7:30 p.m., at Yorkminster Park Baptist Church, 1585 Yonge St. 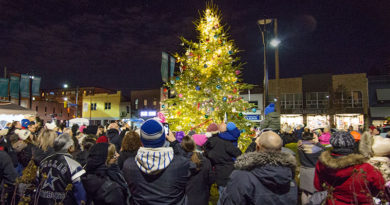