This is a tale of two patios in the trendy Annex community and effort to keep the neighbourhood safe.

Sumit Kapur is fighting to get extended patio hours for the popular Future Bistro at the southwest corner of Bloor St. West and Brunswick Ave. He also wants a street level patio at the Labyrinth Lounge located directly north at 298 Brunswick.

Kapur was somewhat successful when he pleaded his case to community council in mid-September. It voted to extend patio hours to 1 a.m. on Friday and Saturday nights at Future Bistro but it rejected a patio for the Labyrinth.

City staff recommended against the patio because it received some letters of objection.

“The proposal is to put a short lease on (patios) for a short period of time,” said Councillor Adam Vaughan.

He told community council that recent violence and vandalism has escalated in the area leading to the increased scrutiny of patio licences.

“There are cars being vandalized, porches being destroyed, people are falling asleep and crashing into gardens up and down Brunswick Ave., urinating. The whole bit,” Vaughan said. “Accompanied with the murder this summer, it’s unacceptable.”

On July 25, 23-year-old Sebastian Herrera was murdered in an alleyway behind The Brunswick House, where the victim was reported to have been early that evening.

Vaughan said any changes for licenced patio capacity must happen in stages.

“We have to pull back the liquor licence capacity at this intersection to try and regain control and deal with the bad apples and try and give incentives to good behaviour,” he said, adding the patio situation will be reconsidered in the future. 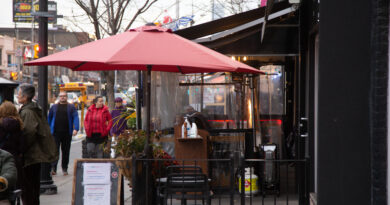 Patios on streets and sidewalks set to return in spring

January 27, 2021 Eric McMillan Comments Off on Patios on streets and sidewalks set to return in spring