But with Erica having graduated with her junior black belt this February, all thoughts of a tap protégé are laughed off as a fleeting memory of maternal instinct gone awry.

For Erica she couldn’t be more proud of her accomplishment in shotokan karate.

“I just got my black belt and I really like what I’m doing,” she said. “Last year I did a speech on it, on self-defence.”

Finding the ancient fighting art important to her, Erica shared with her peers why it was key in her developing self-confidence, discipline and overcoming a slight height disadvantage.

She stands at 4’11”, but doesn’t allow that from her participating in sports like skiing, figure skating and rugby.

Her friend Michaela Jones was Erica’s inspiration to involved with karate. That and the hope by knowing the artform would ward off bad karma.

“If anything was going around in our area, something dangerous, I just want to be prepared,” the 12-year-old said.

Don Ritter, the sensei of the Laird Avenue dojo where Erica graduated, is thrilled by his latest additions. Though they’ll have to wait another four years to become adult belt holders.

“The foundation has been created in terms of the technical aspects and of course a lot more with the leadership, empowerment and confidence,” he said.

In order to obtain their belts, Ritter’s five-pack had to teach their younger peers the basics of karate. With a little diligence the senseis-in-training tie on more than just a belt.

“I liked it a lot,” Erica said. “I was helping my sister’s class because she does (karate) too.”

The benefits of passing down transferable skills are universal, Ritter said.

“They get responsibilities of showing the kids certain beginner moves and then sometimes we separate them into different groups where they get a task to convey to the kids and work on them,” he said. “It kind of brings them out and allows them to be more confident, more outgoing, assertive with anything they’re doing.

“You have stories where some kids are getting picked on all the time, pushed around and then with martial arts they’re allowed to stand up for themselves and not be a victim.”

But it’s more about getting the jump on an adversary, Ritter added.

“Opposed to being just able to defend themselves and being able to know the skill set on its own, there’s a lot more that kind of comes out of it.”

Martial arts can be Systema-ic

March 8, 2012 Town Crier staff Comments Off on Martial arts can be Systema-ic 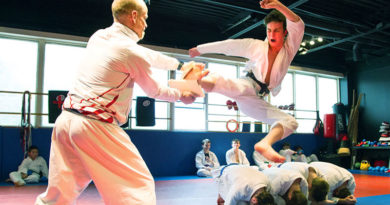 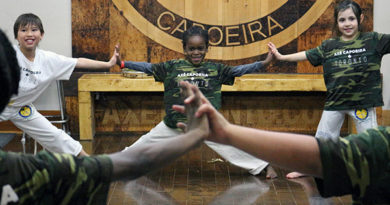