The Winokur family is always running and swimming.

Which explains why Lawrence Park CI freshman, Sydney Winokur, snagged bronze at OFSAA in the midget girls 3080 metre cross country race, Nov. 7. She finished with a time of 12:19.21 at Nordic Highland in Duntroon, Ont.

The 13-year-old admitted it was exciting to be competing in her first OFSAA, but added she’s been running with her brother Ethan since she was in Grade 1 at John Ross Junior Public School.

“She went running with her brother when they were doing cross country at John Ross. I just sort of let her go,” mom Lindsay Winokur said, while standing on the track at Lawrence Park CI. “She showed up one of the first kids. The teachers and I were thinking, well maybe she cut a corner, but she didn’t because of the ravine.

“That’s when I thought, maybe she’s going to be a good runner.”

That hard work has paid off with Sydney’s sport of choice, swimming, as she competes nationally with the North York Aquatics Club.

“I don’t really train,” she said, standing on the track at Lawrence Park with mom Lindsay Winokur. “I’m a swimmer, so swimming helps with my endurance.”

Then, with a sly smile, she shared she goes running with mom, the reason she got into running. And when the opportunity presents itself with Central Toronto Athletics Club members, chiefly Remy Cattell of Leaside High School, who finished second.

Lindsay chimed in, adding her daughter caught the attention of CTAC when she was in Grade 6.

“(Sydney) got a letter from CTAC, inviting her on to the team, and she decided then she couldn’t do swimming and running,” the elder Winokur said. “She decided that she was going to stay in swimming.”

Winokur said she hoped to be representing the Blue and Gold in the pool this winter, all the while taking to the pool at the club level.

Meanwhile, just in the back of her head, she’ll be looking to catch up to her friendly rival, Cattell for their sophomore year.

“I said to Sydney, too bad there weren’t a few more races because I think by then we’d maybe catch up,” Lindsay Winokur said. 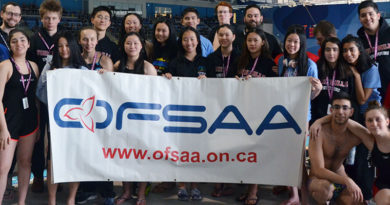 York Mills swim team shines in the pool at OFSAA

March 27, 2019 Brian Baker Comments Off on York Mills swim team shines in the pool at OFSAA

Senior Games no match for twins

February 12, 2010 Town Crier staff Comments Off on Senior Games no match for twins