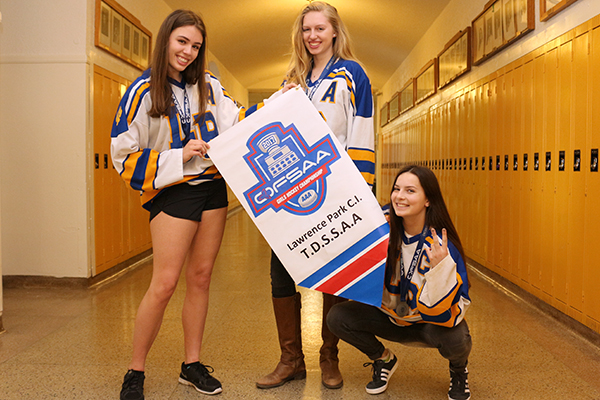 Collette Robert, the mother of Michelle, would purchase a bottle of sparkling juice for every game the team won. When the Panthers won the Citys in early March by beating Humberside Huskies 4-1, head coach Karen Daigle was showered in the juice.

“I had to get my coat dry-cleaned,” she admitted.

However, the AAA girls’ hockey team lost the OFSAA final, 5-1, to Medway High School, March 24. Regardless of the result, they’re happy that they medaled for the second time in a row.

In 2016, they beat Centennial CVI of Guelph to claim the team’s first provincial gold, which earned them a top seed in 2017.

“It feels bittersweet. Obviously, it’s good to get to the finals, and be the second best in the province, but.…” Robinson said.

“It was expected of us, in a way, but the team changed, and we lost a lot of seniors from last year,” Robinson concluded.

Their path to the gold medal match was direct, going undefeated in round robin action, and then bouncing Brooklin Bears of Whitby in quarterfinals, 2-1, and Brantford Mustangs, 3-2 in the semis.

Robinson and Gorman will be graduating at the end of the school year, leaving two big holes to fill. With Gorman being the netminder, it will be up to Maddie Carew to fill those shoes for 2018.

But Daigle said she has no worries.

“Her stats were good with us,” she said. “When she was playing, we were undefeated.”

It’s those numbers that has Gorman not concerned at all. “She just has to play with intensity, heart, and keep doing what you’re doing.”

Johnston is looking forward to another season. The captain has seen a gold and bronze and maintained confidence that the team will reach OFSAA a third year in a row.

“Hopefully we can get another OFSAA run in — another medal. I’m looking forward to it,” she said. “We’re going to miss (Robinson and Gorman) for sure.”