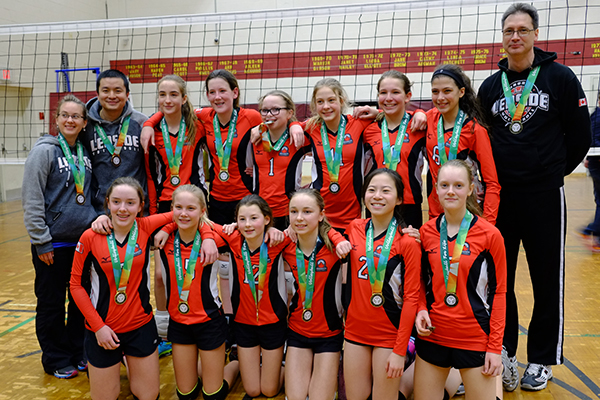 The Leaside Lightning 13U Girls squad was seeking vindication at the McGregor Cup on Feb. 5.

Led by coach Bart Arsenault, the team of a dozen were ranked 11th for the tournament held in Newmarket, and they were looking to strike down their rivals, Aurora’s Storm Hurricanes, who had beaten them in their previous match.

“We felt confident because some of the teams we had seen before specifically Pakmen out of Mississauga,” Arsenault said. “The great thing is we actually ended up playing Aurora Storm in the finals, and we had just lost to them in the tournament before that.”

Buoyed by the leadership of team veterans Taylor Healing, Courtney Anderson and Tatum Finlanson, the squared power through their opponents, which included Pakmen and Lakeside. Arsenault referred to Healing as the team’s spiritual leader, while defence was provided by Anderson, and the team’s quarterback was setter, Finlanson.

“I relied on them heavily on them to lead the team,” Arsenault said. “We’re actually a pretty small team (but) we have some firecracker players.”

Even though size isn’t the team’s strong suit, the girls have plenty of time to grow, and gain ground in the provincial rankings.

“We’re not one of the top teams in the province. But we’re growing. We’ve been increasing our rank over the years,” Arsenault said. “Right now, we’re seventh going into our last tournament of the year before provincials.”

The troupe has two more tournaments left, including one that will have them play an age group up in the 14U division, as well as a seeding tourney in Richmond Hill, March 31 to April 2.

After that, it’s the Ontario Championships in Waterloo.

Next two games fateful for EYCI

October 26, 2009 Town Crier staff Comments Off on Next two games fateful for EYCI