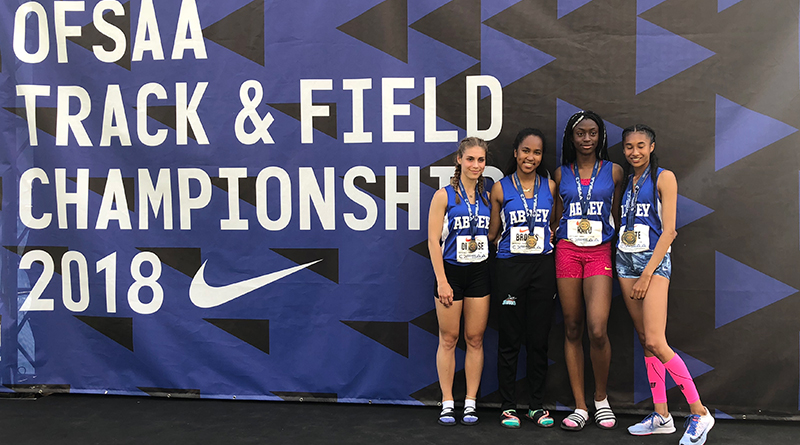 Four golds at OFSAA aren’t a bad tally for a track athlete who has only been racing competitively for a year and a half.

Loretto Abbey Catholic Secondary School’s Lucca Agate claimed three of her golds in individual races, and the fourth was with her relay teammates, Nayla Brooks, Karina Di Biase and Grace Kalu in the 4×100-metre.

The 15-year-old Leasider’s challenge came from running her 100-metre and 400-metre races on the first day of the OFSAA meet at York University, June 7 to 9. She knocked those sprints down earning times of 12.45 and 56.45 respectively.

Agate credits a more disciplined training regimen this year, including weight-training with her father Andre Agate.

“I really focused on eating right,” she said, in a June phone interview. “I made sure I made every run I did was my best. I felt if I wasn’t making every one my best, then I wasn’t going to get anywhere.”

Head coach, Daniele Ferrari, was worried Agate would be too tired for the 400-meter the next day, but that notion was left in her dust. She ended up with a personal best of 24.91.

“It’s very exciting for her in particular,” Ferrari said in a June phone interview. “With her records now, if she continues this in Grade 10, she’ll be sought out by NCAA Division 1 schools in the next two years.”

The four OFSAA medals brought Agate’s total medal count to 19 for the year.

It’s a feat that has numbed her mother, Peggy Tilbenny. Mom was an accomplished volleyball and basketball player in high school, but her daughter’s natural talent, as scouted by the coaches at Flying Angels Track has been a surprise.

“What happened with her, she said in Grade 9, ‘Momma, I would like to join a track club so I can make my high school track team’. I said, ‘Yeah, sure’,” Tilbenny recalled, adding when talk of competition and track meets arose, they shot it down. “No way, I’m not competing, she said. ‘Yes, this is just conditioning,’ we said.

“What [Lucca] has done, apparently, has been fantastic.”

Agate’s results from OFSAA has set the mark at Loretto Abbey, and if she continues her success, Ferrari suspects NCAA Division 1 schools will come calling.

Next up for Agate are the Team Ontario qualifiers in St. Catharines. If she does well there, she’ll be on her way to Brandon, Manitoba for the National Youth Track and Field Championships August 10–12.

Saints ousted in third round of OFSAA

March 16, 2010 Town Crier staff Comments Off on Saints ousted in third round of OFSAA

April 4, 2013 Town Crier staff Comments Off on McLuhan Rebels getting ready to run