The Brebeuf Bulls shook off a two-set deficit to come back and beat the Senator O’Connor Blues 3–2 in junior boys volleyball Apr. 8.

It was a game with major momentum changes. The Blues, on their home court, were looking to win their first game of the season, coming into the contest 0–3.

With a powerful offense from the sides, and a tenacious defense keeping the ball off the ground, the Blues took control of what had been an even match early on.

“We were up 2–0, I guess the winning just got to our heads and we got cocky,” said Glanville.

It was during the end of the second set, which ended 25–19 for Senator O’Connor, which served as the catalyst for the rest of game, according to the Bulls.

“We all got together, we regrouped,” said Viktor Lyczywek, a tall Brebeuf Bull, who split duties between the power and middle positions upfront. “We all talked about it, we calmed down and got ourselves in the game finally, and everything just came together after that.

“The first two sets were a bit confusing,” Lyczywek adds. “It wasn’t the best of our play, but finally we got together, started communicating, everything started going well and it went on from there.”

The Brebeuf looked especially cheeky at times, countering the power from the Blues with varying skill and accuracy on offense. At times, the Bulls would deliver short spikes at the net evading an aggressive O’Connor block attempt.

“We said that we got to get our passes up because we can’t make an attack without passing,” said the Bulls’ Anthony Martorino. “They weren’t really hitting on us, they were tipping over our blocks, so we had to get ready for those tips.”

It was the first game of the season for the Bulls, and to get back in the game on the road was no easy task. But, the Brebeuf squad is well coached and they understand what it takes to win at this level.

“We need to work on some stuff, but overall I think our first game was pretty good.”

The Blues, who remain winless as of press time, have some soul searching to do, but the key to finding that first victory is front of them, says Glanville.

“We just need to keep the intensity up, 100 percent, everytime we’re on the court. You got to play like it’s your last game.”
O’Connor also lost a five-set contest at Mary Ward on Apr. 10. 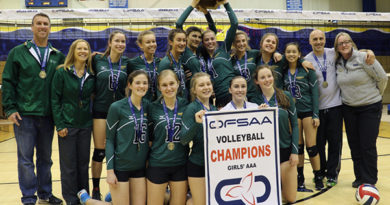 Next two games fateful for EYCI

October 26, 2009 Town Crier staff Comments Off on Next two games fateful for EYCI