Lancing Humberside Huskies for the victory April 26, the Tier 1 girls soccer team was as sharp as their piercing namesakes, winning 2-0.

Factor one in the win was the strong play of striker Stephanie Petsis who netted both goals in the first, Leaside coaches Patty Bontis and Chris Ujimoto said.

“It was better in the first half,” said Ujimoto. “In the second they definitely lost momentum. Humberside definitely picked it up at the end.

“Both teams had opportunities to score. It could’ve gone either way at the end.”

He added his team had to adapt to the speed the ball traveled off the artificial surface at Cherry Beach.

It wasn’t just the ball that was in momentum as Petsis found out the hard way late in the first half.

Attempting to gain control of the ball she connected hard with a Humberside defender and hit the turf.

But she took her bumps in stride.

“I just got back and we just really wanted to beat this team because we are in second and they are in third,” she said. “We were working really well together and it was a big field, so we used the space a lot.”

It was a different story for the Huskies and coach Joanne Loewen, as she said it was tough for her charges to adapt to the new field.

“That’s the only thing I can chalk it up to, and then the two injuries in the first 10, 15 minutes of the game didn’t help,” she said. “It shortened the bench.”

Although Loewen got a strong performance from Mandy Hsieh, who came close to heading the ball past Leaside netminder Melissa Alvarado in the twilight of the match, the Huskies coach had to shuffle her charges into different positions.

“Today, with the two injuries, it was all about people stepping up and playing positions they hadn’t normally played,” Loewen said. “I was moving people back on defence that hadn’t played (it) in years.

“The person I have usually at forward, I pulled her back to play stopper.”

Even though the field was a plus for Bontis, the Lancers coach is hoping the girls can return to where their hearts are: Howard Talbot Park.

Still, there was optimism the team would take their undefeated 3-0 record to the next level against College Français April 28. That sense of triumph was sated with a 3-1 win.

Rams midfielder leads team back to the top

June 6, 2011 Town Crier staff Comments Off on Rams midfielder leads team back to the top 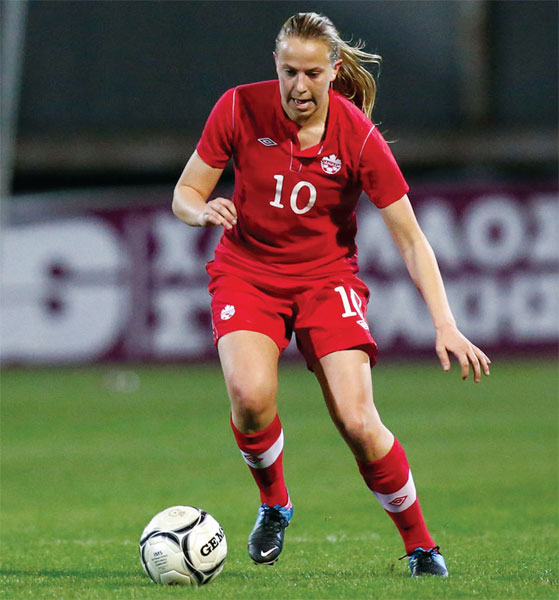 Branksome soccer on an early roll

October 2, 2012 Town Crier staff Comments Off on Branksome soccer on an early roll