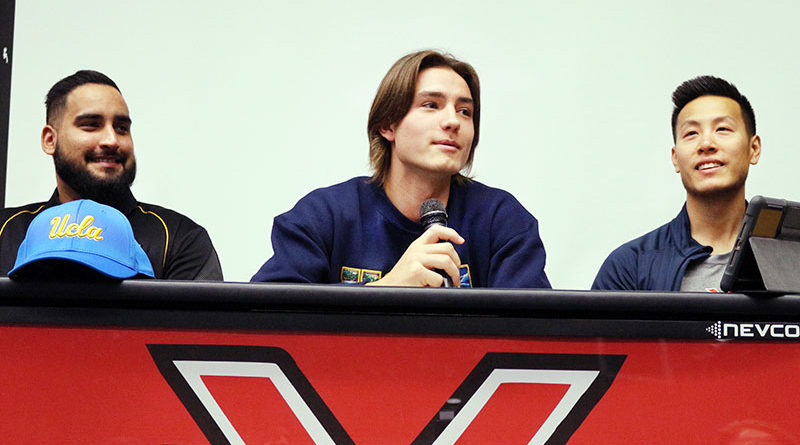 York Mills co-captain Cole Ketrzynski signing a letter of commitment was the perfect way to send off the 2019 season for the senior boys’ volleyball squad.

In the Titan Room at the North Region school, with a string quartet, as well as teammates, administration and family gathered, the 17-year-old Ketrzynski committed to going to the University of California, Los Angeles for the 2019 academic year.

He’ll be going on a full scholarship for volleyball.

The Titans have had tremendous success with him at the left side, as well as brother Xander — now at Ryerson University — and fraternal twin Trent: three straight North Region titles, three straight city championships and two medals in three OFSAA appearances, including this year’s silver.

After the ceremony, which was anchored by Principal Jennifer Chan, as well as faculty head and volleyball coach Steven Kung, Cole Ketrzynski spoke with Streeter.

“(I’m) super-happy with the result,” he said of the 2018 season. “Going into the season, we weren’t sure with how it was going to go, but it came together really well with the effort that the coaches put in.”

The provincials, hosted by Windsor on Nov. 22 to 24, saw York Mills finishing second in their pool with a 3-1 record, their only loss coming at the hands of top-seeded Georgetown.

Throughout the playoff round, they forged ahead, facing a scare with St. Marcellinus in five sets, then facing another Peel Region team in Mississauga. They won in three straight sets to book their ticket to championship finals — a rematch against Georgetown.

“It’s a three-day tournament, OFSAA, so by the final game the boys were gassed and tired. Even Cole, in the semifinals, was, ‘Ooh the body is feeling it’,” Kung said. “I think Cole and Trent worked well together. We played a 6-2 formation, which means there are three hitters in the front all the time.

“All our other players that don’t play club ball stepped up their game incredibly hard to get to the level of those guys.”

The big improvement from 2017, when the team finished fourth, was Cole’s ability to diversify his repertoire. Known more for his hitting and service, Ketrzynski was coming off a shoulder injury, and in that time off he practised his setting and defence.

That move impressed Pakmen club coach Jessy Satti who commended his young charge for his dedication, as well as his ability to draw the attention of UCLA suitors.

“Everyone knew he was a strong hitter, but his dedication to defence and passing were impressive,” Satti said. “He is one of the few guys at his stature and size who is all-round. Watching his discipline over the years has been impressive.”

For the next season, York Mills will be without the services of the Ketrzynski twins. It will be a challenge for Kung, but he’s been given the commitment of his returning squad, many of which are opting for club ball to improve their skills.

As for Cole, he will be missed, in particularly by his mom, Michelle Wassenaar, who was aglow at the signing.

“It’s very exciting. It will be very hard to have him so far away,” she said. “But with the academics and the athletics, it’s a great choice. It’s a great opportunity to live in an entirely different city and climate.”