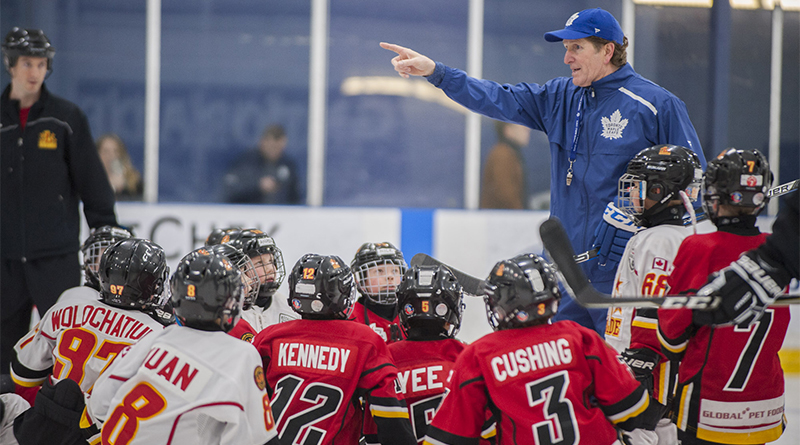 The Leaside Flames Minor Atom AA team had an opportunity fit for an NHL all-star like Auston Matthews.

Toronto Maple Leafs head coach Mike Babcock ran the nine- and 10-year-olds through their drills at practice on Jan. 6.

It was a fitting reward for a team that sold the most Babsocks for a Movember team fundraiser, which is a joint venture with Babsocks, the Greater Toronto Hockey League and Movember. Money was divided between the participating teams and the new mental fitness charity Ahead of the Game.

Team manager Alanna Cushing said the whole process leading to the team selling 1,476 Babsocks – footwear with a mustachioed Maple Leafs coach Mike Babcock on them — and raising over $8,000 — brought the team together as a unit.

“The amazing thing too was that they were collaborating,” she said in an early January phone call. “They were motivating each other. They were coordinating times to go out together.

“The neat thing to see was a lot of the personalities that came out during this process.”

Of course, finishing first, and winning an opportunity to be coached by Babcock was perfect motivation.

“The whole idea behind these [fundraisers], from a management point of view, and from a parent point of view, is we want the kids to take ownership of the team,” Cushing said. “We don’t want parents to just cut a cheque for them to play hockey.

“We want them to work together and to understand it’s more than mom and dad paying for hockey,” she added. “I wasn’t sure how it would go. I was like, ‘Socks? Okay, let’s dip our toe in the water here and see how it goes.’”

They ventured to the Mt. Pleasant Road location of Babsocks, in the Regent Theatre, and picked up their socks from co-founders Tommy McCole and Jake Mednick.

Mednick said Mark McGregor from the Movember campaign contacted them with the idea to reach out to the community.

“We thought it was a really cool idea. It picked up steam until we realized it reached a point where said, what if the fundraising team could win practice with Mike Babcock,” Mednick said. “We summoned up the nerve to ask him because we sort of worked a bit with Babs before but when we first launched.”

The Babsocks were started on a lark by the duo as a joke when the Maple Leafs first announced their hiring of Babcock in 2015. It’s developed in the fundraising company, MyFranchise.

Mednick said the hope is to expand the campaign throughout the province, and eventually, they want to take it nationally.

The best part is the pro-active and passionate response from Babcock.

“It’s one thing for Mike Babcock to give us his time, but to see him on the ice and how enthusiastic he is in coaching the kids, it makes the day that much more special,” Mednick said.

The GTHL partnered with Movember and Babsocks in 2017 to raise money for both teams and mental health awareness. This year alone, the hockey league, through other teams, including Leaside, raised $75,000 for the charity. Other teams included Toronto Wolverines Minor Bantam A and Goulding Park Rangers Peewee A.

It was a big boost to the program that started in 2017. GTHL Executive Director, Scott Oakman, was happy with the exponential growth from his league.

“We’re really proud of this initiative and our relationship with Babsocks and the Movember people, not just for this initiative but for other mental health initiatives we have taken with them,” he said. “We’re confident that we’ll grow in both popularity and the amount raised.

“Obviously those [Leaside] kids that were involved in raising funds are learning about the other key aspects of mental health and mental fitness.”

March 7, 2013 Town Crier staff Comments Off on Fifty and counting