Last summer the federal Electoral Boundaries Commission report proposed significant changes to the GTA riding boundaries in response to the population changes in the 2011 census and the decision of the government to create 30 new ridings. Ridings were required to be about 100,000 strong and many of the GTA ridings were way too big.

There was an immediate negative reaction to the report. The proposed new riding of Mount Pleasant would have divide the gay village in half at Wellesley Street. The denizens of The Annex did not see themselves as part of St. Paul’s; The Annex to them was definitely south of the tracks, their relationship is with Bloor Street, not St. Clair or Eglinton.

What followed was an inspiring demonstration of the strength of neighbourhoods. Toronto has always been described as a city of strong, vibrant neighbourhoods and their residents said loudly that they did not want to be divided. Neighbours wanted to be in the ridings where they shop together, where their kids go to school together and where they walk and play in the parks together.

In November during our six neighbourhood checkups, there was unanimity that the proposed Mount Pleasant riding made no sense to the communities. Many individuals suggested that perhaps a new riding down by the waterfront would be a better solution to the numbers problems of the downtown ridings. People strongly expressed the view that St. Paul’s, very near to the target size, should be left as a midtown riding. They didn’t see the communities south of the tracks as neighbours.

It was interesting to take this information to the commissioners during the November hearings. We heard passionate presentations from neighbourhoods but also knowledgeable analyses. I learned that certain roads are considered boundaries and others spines. It was clear from the Annex folks that they saw Bloor Street as a spine. It was clear that railway tracks are boundaries. It was clear that the area between the waterfront and the railway lands was not the required 100,000.

So when the revised boundaries were tabled this week, we were very impressed that the commission had really listened. The unpopular proposed Mount Pleasant riding was vapourized. Presto, there was indeed a new waterfront riding called Spadina-Fort York. The Annex remained intact in a new riding called University-Rosedale. Toronto Centre is now south of Bloor with the gay village intact. St. Paul’s remains a midtown riding with a changed eastern boundary as those between Mount Pleasant and Bayview are folded into Don Valley West.

I’m sure that not everyone is happy. But I believe every single person who took the time to come to our neighbourhood checkups or to the commission hearings recognizes that their time was well spent. They passionately described and articulated the attachment to their neighbourhoods, and they can now actually see their fingerprints on the riding boundary changes. There was real two-way accountability; democracy-between-elections. The result was true civic efficacy.

People not consulted on immigration changes

June 14, 2012 Town Crier staff Comments Off on People not consulted on immigration changes 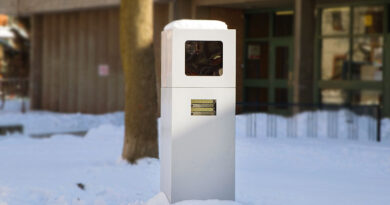 Etobicoke drivers were most ticketed by ASE cameras last year

January 15, 2021 Eric McMillan Comments Off on Etobicoke drivers were most ticketed by ASE cameras last year