I brought along some comfy shoes to go with my pen and paper for this assignment. Having lived in Thorncliffe for a few years in the 1970s, I thought I was pretty knowledgeable about its history. But, boy, was I in for a surprise!

This walking tour of Thorncliffe is part of Jane’s Walk, a series of urban walks held on the first weekend in May in honour of urbanist and activist Jane Jacobs. Started in 2007, walks have been held in communities and cities all over North America, and recently Spain and India have joined the movement.

Jacobs introduced new and what some might consider radical ideas about how cities function, evolve and fail. Many of her ideas are now just plain common sense to architects, planners, politicians and activists. Jacobs, who lived in Greenwich Village in New York for decades before moving to Toronto in 1968, helped derail the car-centred approach to urban planning in both New York and Toronto, pushing to stop the expansion of expressways and roads in urban areas.

Our local walk, entitled “Jane’s Walk: Layers of Thorncliffe Park”, was organized by Geoff Kettel, who is well known in the community through his work on the Toronto Preservation Board. Working with him on the walk was Sabina Ali, who heads up the Thorncliffe Park Women’s Committee and is passionate about her community and the direction it should take.

There were eight stops along the way, and both Kettel and Ali addressed the walkers at each location, speaking to its history and or what is happening today.

The walk started at the Thorncliffe Park Library. Kettel let us know that we were standing on land that was the traditional territory of the Mississauga.

Prior to 1920 Thorncliffe was a farm, complete with grist and paper mills, a brick factory and even a brewery. In the early 20s Thorncliffe Farms was purchased by a U.S.-based company that operated a racetrack between May 1920 and June 1952.

The racetrack included a mile of track, seating for 4,000 people and stalls for 610 horses. In 1952 the Ontario Jockey Club purchased Thorncliffe Park and shortly thereafter sold it to developers. The U-shape of Thorncliffe Park Dr. honours its racetrack past.

In 1954 the Ontario Municipal Board approved the annexation of 387 acres of Thorncliffe Park to the Town of Leaside.

Thorncliffe Park, celebrating its 60th anniversary this year, has been referred to as Canada’s “Arrivals City” and is now home to more than 30,000 people in an area that comprises one square kilometer.

While stopped at the Thorncliffe Garden Club, at Beth Nealson Drive, the walkers learned that the steep hill these gardens back onto — overlooking Don Valley — was once used as a ski jump. (One of several interesting facts that I learned on this walk.)

From behind the old Coca-Cola facility Kettel explained that the building is a fine example of mid-century Modernist architecture, and that a developer has purchased the site and submitted an application to build a Costco outlet there. The building is still there, but the old bottling plant next store has been demolished.

The walk continued along Beth Nealson and down the western side of Thorncliffe Park Drive, finishing back at the library.

Thorncliffe Park is still as its motto once proclaimed, A Good Place To Live, Work and Shop. 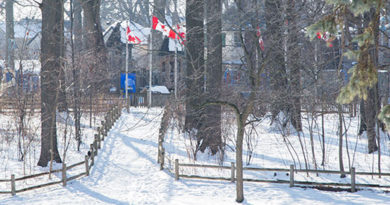 May 5: Jane’s Walk through history of Beaches’ parks

April 21, 2018 Streeter staff Comments Off on May 5: Jane’s Walk through history of Beaches’ parks 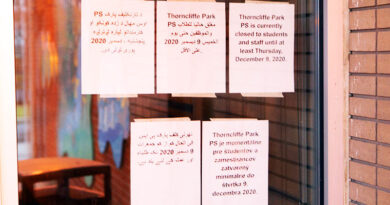