How many southbound drivers on Bayview Avenue do you think would ignore the two “no-left-turn onto Parkhurst 7–9 a.m. and 4–6 p.m.” signs?

Helmetless, I planted my derriere on a chair behind protective telephone-pole guywires on the north-east corner of Bayview and Parkhurst Boulevard during Friday afternoon’s Victoria Day weekend rush hour. And I counted. Indeed, 20 drivers made the illegal turn. However, at 6 p.m. the number of drivers making that turn increased by about 50 percent. So perhaps those signs do have a significant discouraging effect.

But making that illegal left turn during rush hour makes the situation even more dangerous for wannabes of Evel Knievel, the death-defying stunt-motorcyclist of the 1970s, most infamous for his failed attempt to rocket over Snake River Canyon. Our local Knievel-ists insist upon bolting across Bayview’s four lanes from Parkhurst to Soudan Avenue or Soudan to Parkhurst, where ReMax and Parkers Dry Cleaning kitty-corner each other. However, our Evel K. is not expecting cars travelling south on Bayview to turn into his trajectory. The calculation for a successful crossing is often forbidding enough without that added factor.

I returned to the scene of the crime for the Tuesday morning rush hour, 7:15–9:15 a.m. There were fewer illegal left-turns onto Parkhurst — a mere 14. A substantial portion of these drivers have no qualms about holding up traffic behind them as they await a break in northbound traffic.

I’d witnessed more than a few close calls during the late afternoon rush hour, accompanied by angry horns, but just a few in the morning rush hour.

One surprise for me was how well-used the illuminating crosswalk was. Tuesday morning, 42 brave souls pushed the button, hazarding safe passage — something I have avoided doing for many years. This crossing truly is for defensive-minded pedestrians only. Most drivers are respectful, but many barge through, oblivious or uncaring. This applies especially to the walkways crossing Parkhurst and Soudan; the least of an aspiring Evel Knievel’s concerns is some annoying pedestrian spoiling his leap over the Snake River Canyon that is Bayview.

After witnessing a fairly horrible accident at the intersection in early May (see right), I’ve been bugging city councillors Jon Burnside and Josh Matlow to get the transportation people to take action. On the Victoria Day weekend, Jon Burnside e–mailed me saying, “It looks like we will probably go with a ‘No left-turn or straight-through 7 a.m.–7 p.m., Monday–Friday.’” Of course, officials will have to conduct traffic studies, write reports and make recommendations before getting council approval. So don’t expect to see those signs posted for some months yet.

Can those signs be expected to shut down Evel Knievel jumping Bayview? Increased enforcement at problem intersections — like this one, which is a doozy — might be a good start. 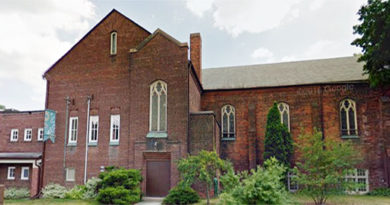