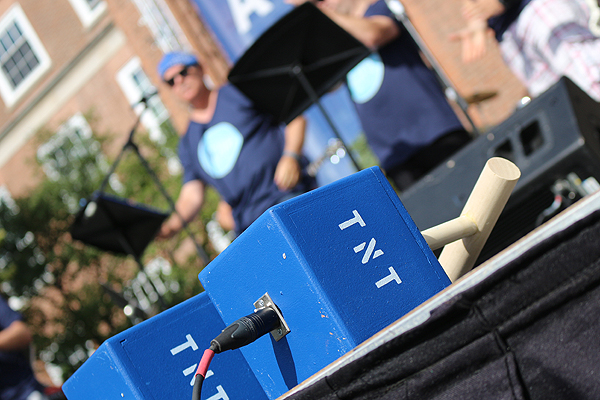 With a little rock music and fireworks, Upper Canada College’s Think Ahead Campaign unveiled the running total of its fundraising efforts: $103,232,000.

The unprecedented tally, announced during the school’s Association Day, is part of the 186-year-old institution’s most ambitious campaign — arguably most ambitious in Canadian independent school history — which aimed to raise $100 million.

Principal Jim Power, who opened Association Day by singing Bruce Springsteen’s “Glory Days” with his own E Street Band, said he was elated with the campaign surpassing its goal.

“We realize the old line, ‘Too much is given, too much is expected,’ and we’re really incredibly fortunate to be here,” he said. “I feel like we’ve been blessed.”

Half of the money already raised — a final tally will be announced in November — will support day and boarding students.

The rest of money will be split into boarding ($14 million), a renovation of the Upper School ($30 million), which is the second phase after the William Wilder Arena and Sports Complex that opened in 2008, as well as curriculum and professional development ($20 million) through programs like UCC’s Global Leadership Initiative and Character Project.

Helping with the campaign was the Council of 1829, a group of Old Boys — the name given to alum — who help keep the school’s foundation intact.

Chairperson Doug McCutcheon (Class of ’83), made the announcement, as a mix of Old Boys, current students, parents and donors, along with Ward 22 Councillor Josh Matlow, jointly pushed plungers on mock TNT boxes to unveil the banner.

“It’s unbelievable,” McCutcheon said. “The target we set was already ambitious and to raise this amount of money shows what incredible support there is from parents, alumni, old past parents. It’s phenomenal.”

After joking about his band’s performance of Bachman-Turner Overdrive’s “Taking Care of Business,” Power voiced the hope, for UCC as well as other independent schools across the country, that this “ambitious” campaign is carried on.

“The good thing is, and I think we’re on the verge of hubris with this, but I hope it inspires other schools. That would be the win-win for me,” Power said. “The big piece coming out of this is the financial assistance program, and I have had more principals from other schools do the same thing.

“If we can make that easier for people, it would be an exponentially better gift.”

A dance to remember

February 19, 2013 Town Crier staff Comments Off on A dance to remember