Works of art in Leslieville are being defaced by tagging vandals.

The walls of businesses and alleyways throughout the area have been spray-painted with graffiti. The markings, sometimes known as tags or bombs, can even be found covering large portions of community murals.

Local blogger Chris Emmanuel[/url] has been documenting tagging in the area and says it began this winter.

Many of the murals were painted by local high school students working with the Ralph Thornton Community Centre. Police say murals are often used to discourage tagging as most graffiti enthusiasts are hesitant to paint over another artist’s work.

“It’s very disappointing, it’s very frustrating,” said Rob McDonald, a police officer at 55 Division helping to combat graffiti in the area. “Anybody scrawling on a legitimate piece of art is not an artist.

“We’ve worked with various agencies in hopes that a legitimate mural would be respected by all, unfortunately, that’s not occurring.”

Skam, as he is known, is the owner of a graffiti supply shop and a reformed tagger. Red brick was his canvass 20 years ago but now he mostly paints commissioned works for companies and galleries. Even during his tagging days he would never paint over a fellow artist’s mural, he says.

“I wouldn’t do that because that’s like disrespecting someone else’s work,” he said. “That’s what gives graffiti a bad name, but it’s part of the culture.”

The City of Toronto recently launched a campaign to remove signs of graffiti culture within its borders.

Since Ford’s inauguration the city has already handed out thousands of notices to business owners instructing them to remove graffiti on their property. Although the mayor said he sympathizes with the affected businesses he said it’s on them to have the tags removed.

“I feel sorry for the businesses that get tagged or get graffiti sprayed on them but it is their property,” Ford said. “They’re responsible for keeping it clean and all we’re asking for them to do is do that.”

McDonald said the local community centre hires youth in the summer to remove graffiti from private and public spaces. He also said that recent tagging of murals in the area is not gang-related.

“We don’t, in that particular part of the division, have an issue with gang graffiti at all,” McDonald said.

June 13, 2011 Town Crier staff Comments Off on Graffiti given reprieve 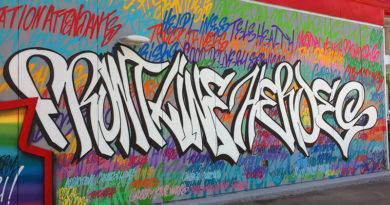