Often, the best way to protect us from nature is to use nature itself. And one good example is the exciting proposal in the long-neglected port lands on Toronto’s waterfront.

Plans are underway to create parkland amid an exciting new urban redevelopment, with the added benefit of protecting us from catastrophic flooding. While it might be a while since Toronto last suffered a major flood, we’re always just one big storm away.

The worst flooding to hit the city was in 1954 when the eye of a dying Hurricane Hazel went straight up the Humber Valley. It killed more than 80 people in Canada and caused extensive property damage. And Toronto learned we couldn’t build homes in river valleys, so created ravine parks instead to help absorb heavy rainfall.

These storms are rare — a big one in the 1980s put the Bayview Extension underwater — but they are bad. The city believes major flooding is still possible as far over as Leslie Street south of Queen Street East. Until recently, it could have reached as far as King and Front streets. That’s been prevented with new work on the Don’s west bank to protect new buildings there and the downtown core.

Plans by Waterfront Toronto and the Toronto Region Conservation Authority could do the same for South Riverdale, Leslieville and Lake Shore Boulevard. They are going through an environmental assessment process. If approved, they will re-naturalize the Don’s mouth — giving Toronto more usable parkland, new urban communities and helping prevent damaging floods.

It’s all part of the major redevelopment of the port lands, which will help return people, nature and jobs to our waterfront. Some new jobs are already there, thanks to a new film studio. These changes would enhance that film studio investment. I am urging the provincial environment minister to approve the plans quickly to bring more activity to what’s long been a sad place.

I congratulate the agencies behind these plans, which are win-win for our community and a good example of how sustainable thinking can benefit us all.

Floods in Toronto might be rare. But when they happen, they affect large numbers of people, property and transportation infrastructure.

So it’s good news we’re investing in nature to protect us from nature, and along the way rejuvenating a potential jewel along the lake. 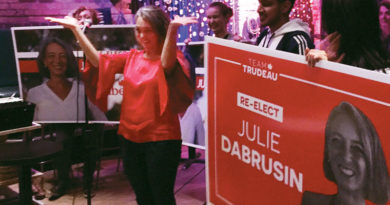 No fluke, Liberals hold on to Toronto–Danforth

October 22, 2019 Eric McMillan Comments Off on No fluke, Liberals hold on to Toronto–Danforth

Liberal candidate getting to work

February 15, 2012 Town Crier staff Comments Off on Liberal candidate getting to work