Shortly after forming in 2009, the band Young Empires got flown down to Bogota, Colombia to take part in a music festival featuring well-known acts like Green Day and Jamiroquai.

“It was something special just to see the culture down there and kind of get treated like Kings of Leon for a weekend,” bassist Jake Palahnuk says from a Laundromat in Parkdale. “It was pretty neat, having your own bodyguard, five-star hotel rooms each. We were just a young band with a couple of demos up online so it was pretty cool.”

Although the band — which also includes vocalist and keyboardist Matthew Vlahovich, guitarist Robert Aaron Ellingson and drummer Taylor Hill — resides in Toronto’s west end, Palahnuk got his start in music in Hamilton, where he played his debut show as part of a rock cover band at a grade 7 talent show. He took up percussion first but changed when the band he wanted to join was searching for a bassist. After trading his Nintendo 64 for a Squier bass and teaching himself to play, he honed his skills in the Toronto-based group Turn off the Stars for seven years.

“I had met Matt, our lead singer, actually at my last band’s last show,” he says, adding Vlahovich had a solo project then called Golden Girls. “At the time I had been playing with my guitar player Aaron in another project just kind of jamming, playing for fun and I reached out to Matt to see if he wanted to join and the three of us just kind of hit it off right away and started making songs.”

Within a few weeks of joining forces, Vlahovich was invited to play a solo gig, which they decided to play as a band instead and immediately had to come up with a band name for promo posters.

“We just wanted to choose something young, something fresh, that had potential to be something really big and Young Empires came out of that,” he says.

The group’s debut EP, Wake All My Youth, was released in January 2012 and landed them live appearances on MTV, George Stroumbolopoulos Tonight and 102.1 The Edge. Their single “White Doves,” featuring an interactive Facebook music video, also receives quality airtime across the country.

In June the band took the stage at the Horseshoe Tavern for a North By Northeast Festival showcase featuring Yukon Blonde and The Lumineers, which was broadcast live on CBC Radio 3.

“That was a pretty incredible show,” he says. “It was really great. I think there were more people outside trying to get in than there were inside. It was so hot in there, just disgustingly hot. The hottest show I’ve been to, it was like a sauna pretty much on stage.”

On Aug. 30 the band performed along with Lights at the “Ultimate End of Summer” party at Sunnyside Pavilion, before embarking on Canadian tour dates with electro-pop group Dragonette.

“Every tour we all end up getting in fights by the end of it but that’s expected when you spend 24 hours a day with four people — it’s like being married,” he says. “We’ve become best friends through the course of this band. I think you kind of have to be if you’re going to make it.”

A perfect pairing in many ways

December 21, 2009 Town Crier staff Comments Off on A perfect pairing in many ways 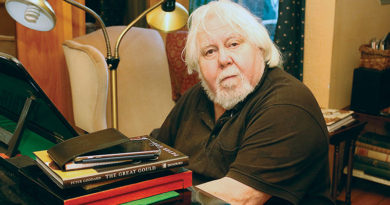