On Feb. 9, a contingent of residents from Leaside and Davisville, consisting of Erika Cooke, and John Gaitanakis (from the South Leaside, and North Leaside Transportation Committees, respectively), Andy Gort from the South Eglinton Residents and Ratepayers Association, myself from the Leaside Property Owners Association, and Councillor Jon Burnside were privileged to take part in a  tour of the tunnelling progress of the Eglinton Crosstown LRT project underneath Eglinton Avenue East.

Don and Humber are the names given to the Crosstown Tunnel Boring Machines (TBMs) which are drilling the twin tunnels of the underground section from Brentcliffe towards Yonge Street. They began their journey in September 2015, and cover about 10 metres a day.

Based on this tour I am pleased to confirm that Don and Humber are making substantial progress.

We walked the length of the north tunnel drilled by Don from the Brentcliffe portal to a point near Hanna Road, a distance of almost a kilometre.

After inspecting the tunnel boring machine in operation, we retraced our steps back to Brentcliffe.

The twin tunnels are about 6 metres in diameter and lie about 18 metres below the surface of Eglinton Avenue.

After the tunnel excavation is complete, tracks and other utilities will be constructed inside the new tunnels.

We began the morning at the Metrolinx construction office at 939 Eglinton Avenue East with a mandatory safety instruction session, and were fully kitted out with Personal Protective Equipment including an Oxy-K, which as the name suggests provides an emergency oxygen supply.

On behalf of the Leaside contingent we thank Metrolinx for allowing us the opportunity to see the work in progress and let you know that “progress is being made”, by Don and Humber, our local TBMs.

Oh, and by the way, while there was a snow shower on the surface that morning, inside the tunnel it was warm, and the workers were in T-shirts! 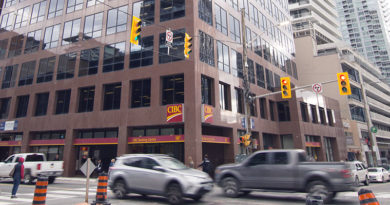 October 24, 2019 Eric McMillan Comments Off on Now that the Yonge-Eglinton mess has been cleared up (almost) 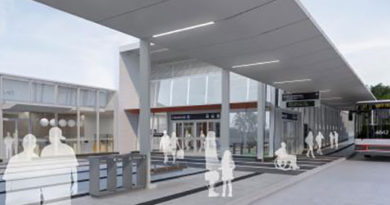 End of a plaza