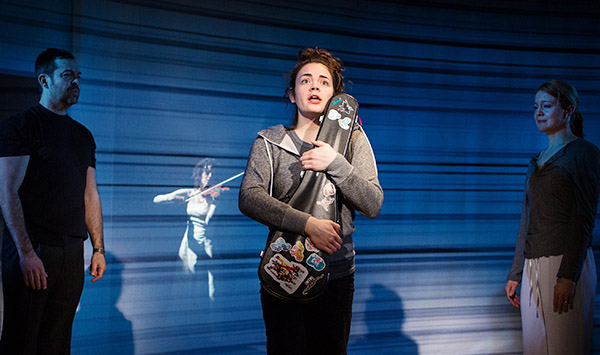 Infinity, by Hannah Moscovitch, directed by Ross Manson, running at Tarragon Theatre’s Mainspace to May 3.

I want you to be as surprised as I was that a play that includes an onstage violinist to punctuate emotional moments, a note in its program from a “consulting physicist” who provided the playwright with an eight-page biography of the play’s physicist character, and that features a fully grown woman playing an eight-year-old could work as well as it does.

This is the first play I’ve reviewed at the Tarragon that succeeds in that uniquely theatrical balancing act of interrupting straightforward storytelling with odd moments that illustrate a larger theme that snaps into focus only at the very end. I’d rather you experienced that moment, as I did, without knowing anything about the play other than what I’ve written above.

Unfolding as a series of vignettes, Infinity charts the romantic relationship between Harvard-trained composer Carmen (Amy Rutherford) and theoretical physicist Elliot (Paul Braunstein), starting with their Meet Cute. In the awkward manner of someone more comfortable with numbers than people, he asks why she’s crying. She replies she left her husband, a farmer, and his wonderful family two days ago because she realized she didn’t love him anymore. He asks her on a date. She says she can only promise him 20 minutes of sex and 40 minutes of crying. The scene literally ends on a romantic note, courtesy of the violinist (the talented Andréa Tyniec).

Like much of the play, that scene shouldn’t work. Carmen’s explanation is contrived, Elliot is off-putting to a comically unsettling degree, and everything seems to unfold in real time, which means the couple goes from first look to first kiss within 10 minutes. But somehow Braunstein and Rutherford’s commitment, Tyniec’s violin, director Ross Manson’s staging and playwright Hannah Moscovitch’s often-brilliant dialogue combine to bring this oddly presented story to credible life.

Infinity is narrated, sort of, by an anxious-looking Haley McGee, who plays the couple’s daughter, Sarah Jane, both as a 20-something and an eight-year-old in scenes with her parents. (One line winks at the absurdity, which seems about right.)

But instead of describing her parents’ relationship, Sarah Jane, who appears just slightly more comfortable around people than her father, recounts how she and a “tall blonde from Iowa” became close friends in university (it involved a tampon, the friend sleeping naked, and cannot be printed in a family newspaper); how angry she was when the friend called her “f-ed up” in love; and multiple tales of her failed relationships, such as the two and a half years she spent with the best friend of the guy she had a crush on.

Infinity isn’t a comedy, though it’s often uproariously funny; nor is it depressing, though certain parts are undeniably sad.

Eventually we learn that yes, Sarah Jane is messed up in relationships, as are Carmen and Elliot, but one of the show’s many pleasures is that all three characters are essentially well-meaning, if occasionally grating, individuals. There are no heroes or villains in even their most tragic stories.

Before watching Infinity, I chatted with a friend of the play’s music director, Njo Kong Kie, who had seen an earlier version of the show in rehearsals. She told me the crew’s goal was to make us feel. If the audience’s reaction on opening night was anything to go by, they succeeded beyond their wildest dreams: Infinity received two minutes of sustained applause louder than any I’ve heard at the Tarragon, and three-quarters of the audience gave it a standing ovation.

It wasn’t until I was going home, the story crawling inside my head, that I finally recognized its true theme: It had been hiding in plain sight, driving the tale from its very beginning. Except what I had thought of as the beginning was actually a secondary plot, and what seemed like a throwaway joke had marked when the story truly began.

If that isn’t evidence of great theatre, I don’t know what is.

Actor is a rare find

February 6, 2013 Town Crier staff Comments Off on Actor is a rare find

’Twas a lie that made Geert Piller realize the truth

November 17, 2014 Eric Emin Wood Comments Off on ’Twas a lie that made Geert Piller realize the truth 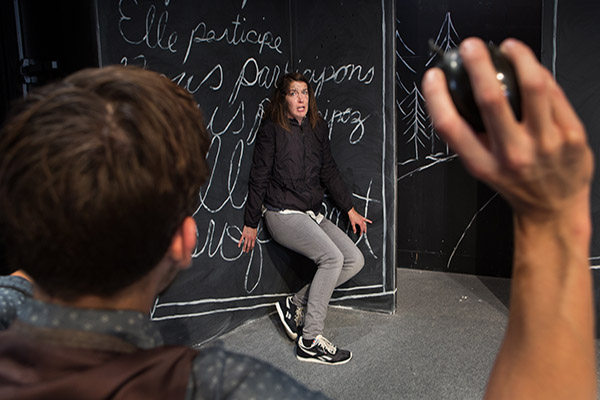 Who is the Enemy of the People? It’s up to you and me

October 18, 2015 Eric Emin Wood Comments Off on Who is the Enemy of the People? It’s up to you and me