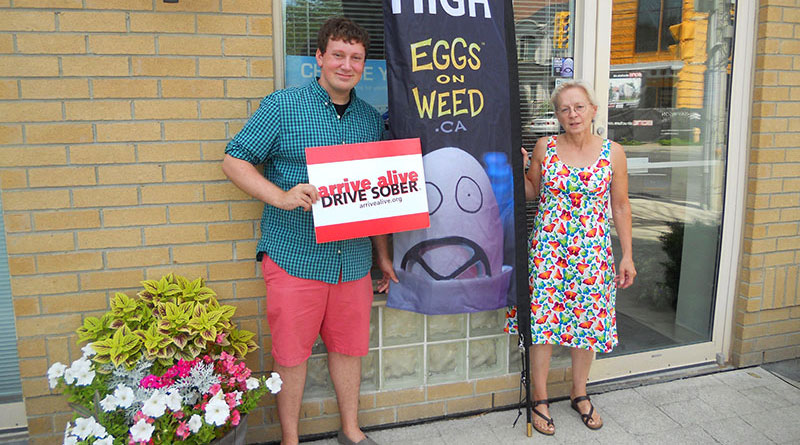 Anne Leonard and Bayview Avenue have a history. In 1979, on the Bayview extension, Leonard’s husband, 23 years old and driving to work, nearly died in a head-on collision with a drunk driver who’d been drinking all night at his sister’s.

Anne’s husband lost a kidney and broke so many bones that it was two years before he could return to work. The drunk lost his license for a few weeks and paid a few hundred dollars fine.

The couple sued the drunk for $80,000 and won, but millions wouldn’t have compensated for the trauma, the pain, the physical debilitation, and the career setbacks as Anne quit her own job to facilitate her husband’s recovery.

It was a life-transforming event for Leonard, and the non-profit organization Arrive Alive Drive Sober is the result. It’s the smaller Canadian-based alternative to Mothers Against Drunk Driving, the U.S.-based prod to driving sobriety.

Since 2000, Arrive Alive’s main office has been in Leaside at Bayview and Merton Street, across from Once Upon a Child. Leonard also lives on Bayview, a bit north across from the Humphrey Funeral Home, a constant reminder of the stakes involved in the fight against impaired driving.

And of course, just a few further blocks north, is a cannabis dispensary called Eden which opened this summer. It represents another challenge for Arrive Alive.

Whether one is pro or contra the impending legalization of weed, the conventional wisdom that driving stoned on grass or hash is nowhere near as dangerous as driving drunk is misleadingly and dangerously wrong.

I even recall from my own handful of experiences of toking and driving, all too many decades ago, that obviously this was just a different sort of impaired driving. Stoned, you just aren’t driving with your full wits about you.

I’ve come to feel we should reconceive driving as a sacred activity, given the vehicle’s capacity to inflict mayhem and death and given that a century of brilliant technological innovations in cars deserves better than some boozed-up bozo totalling this marvel in an …. I almost said “accident,” but that is a weasel-word that Leonard would like to see banished from the impaired-driving lexicon. Even the most clueless driver is aware that imbibing alcohol so greatly increases the chances of a collision, that calling said outcome an accident constitutes an obscene evasion of responsibility.

Arrive Alive is not in the business of prohibition. People do drink, so Arrive Alive has fruitfully partnered with The Beer Store and even the LCBO in anti-drinking and driving campaigns.

Leonard looks forward to working similarly alongside Eden or whatever marijuana dispensaries survive this interim period prior to full legalization.

Toking up will continue regardless. It’s the “and driving” part that Arrive Alive cannot abide.

Research has shown that driver reaction times after smoking weed are slower. Peripheral vision shrinks. The ability to focus decreases. The stoned driver is more easily distracted by elements of the driving experience he or she should not be attending to — like what a great work of art that mailbox on the corner is.

And most stoned divers have also been drinking. The two don’t cancel each other out — they’re additive.

I hesitate to throw any statistics around, because they almost always require more elaboration that I have room for here. So here’s one non-statistic for you: there are scores of people out there who have no idea they are still alive or at least un-maimed thanks to the efforts of Leonard and co-workers like her son Peter Wytka and Michael Stewart. Bravo. Time for marijuana dispensaries to get with the Arrive Alive program.